The severe weather threat from Saturday night’s storms is now over. These storms were able to pack a punch in some locations, with 41 total storm reports across Southeast Nebraska as of 1AM Sunday. There were a lot of moving parts to Saturday night’s forecast, with many subtle surface and upper-air features that proved to be important in the evolution of the storm system.

While the severe weather threat diminished greatly as the storms approached Lincoln, flooding turned out to be a greater concern in the capital city. A Flood Warning remains in effect Lancaster, Seward, and Butler counties until 12:30PM Sunday. Although the heavy rain has ended, there still may be flooded areas! 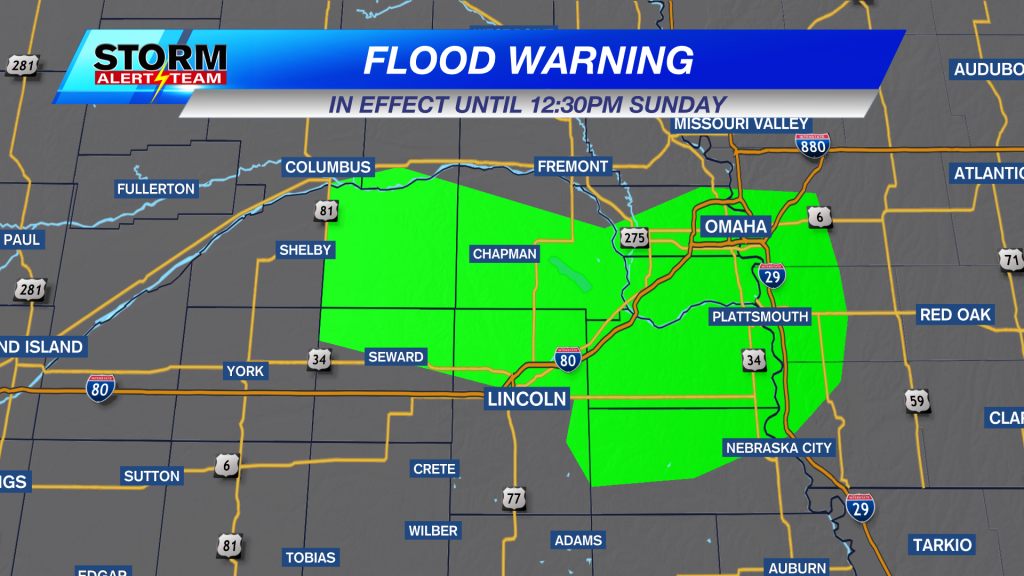 We’re left with some light showers late Saturday night, but these will not be severe. We won’t rule out isolated showers throughout Sunday morning as well. Otherwise, expect mostly cloudy skies on Sunday morning with a low temperature around 65°. 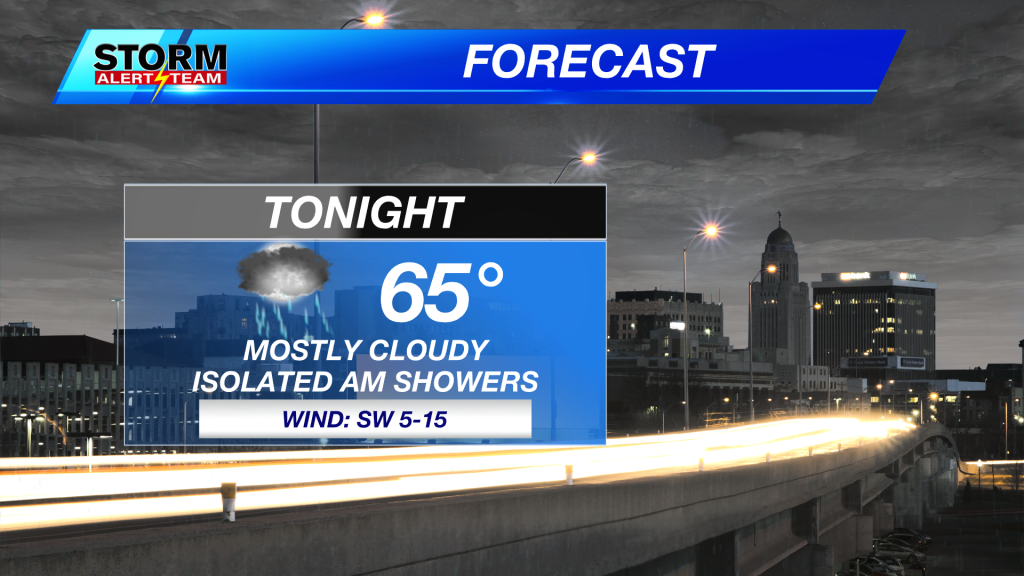 Rain will fizzle out and clouds will start to clear by Sunday afternoon, becoming mostly clear to partly cloudy. It’ll feel humid on Sunday, with high temperatures in the low 90s – a forecast high of 91° for Lincoln. 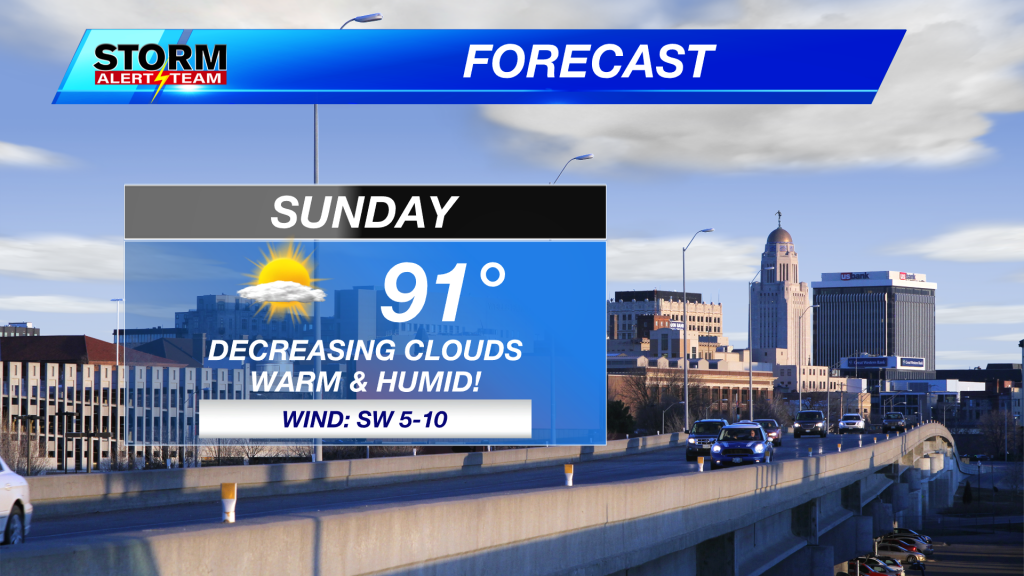 We should stay dry for most of the day on Monday as well, with highs warming to the mid to upper 90s. We may see a few isolated storms late Monday – but the chance is fairly small. Another disturbance arrives late Tuesday and into Wednesday morning. That disturbance could bring another opportunity to see some rain. 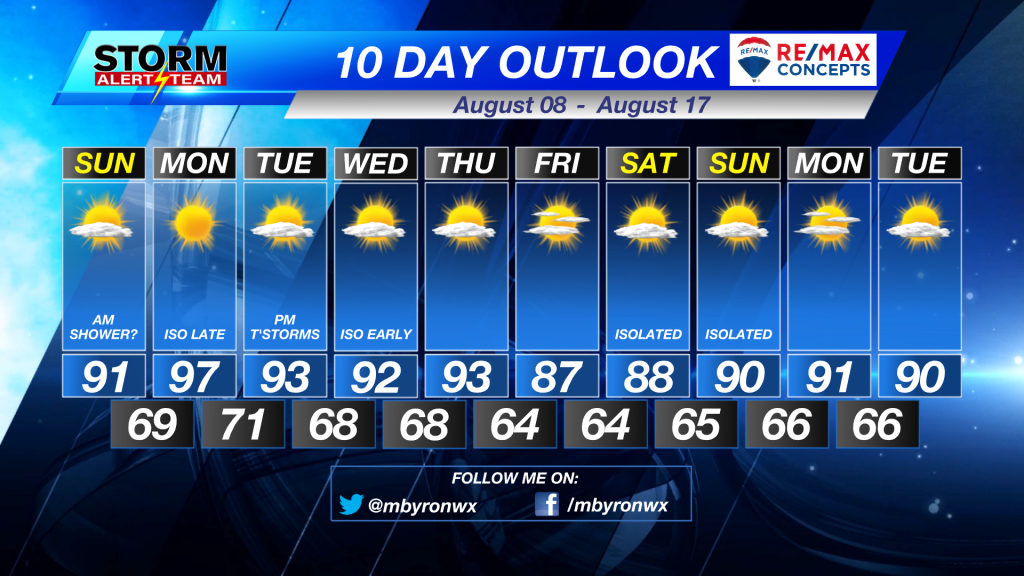 The Storm Prediction Center has issued a Severe Thunderstorm Watch for much of Southeast Nebraska. This watch will remain in effect until 1AM Sunday. 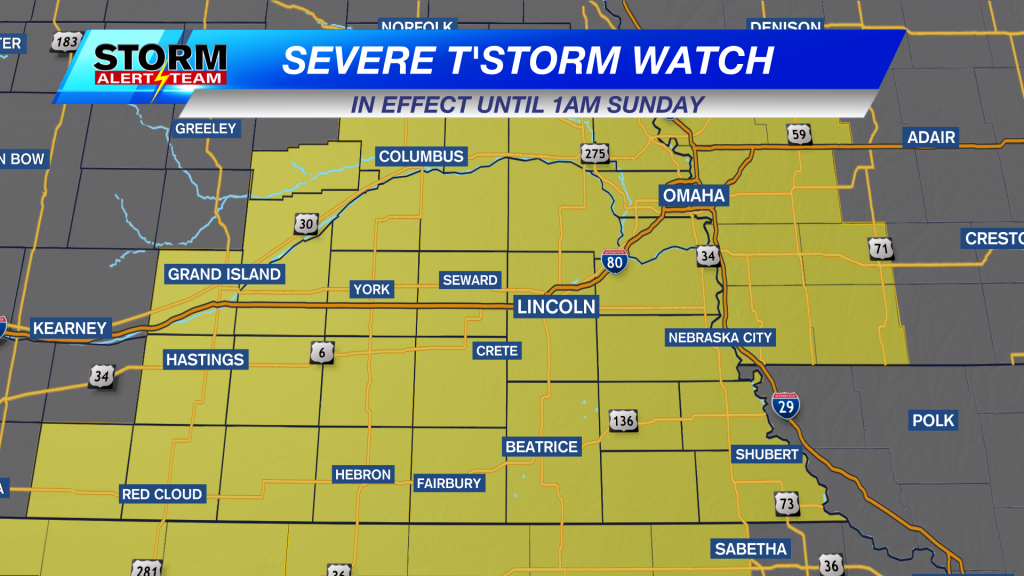 As of 7PM Saturday, some isolated storms are cropping up in the Channel 8 viewing area. These storms are widely scattered and some have Severe Thunderstorm Warnings to go along with them. Large hail is the main concern with the early evening storms, though we won’t rule out the chance for damaging winds and an isolated tornado. 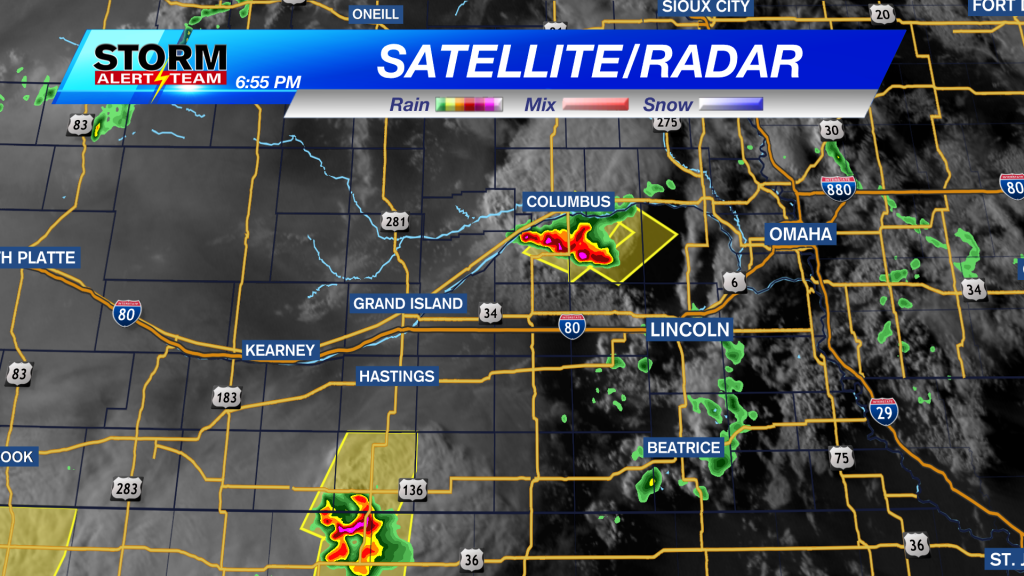 As we go over the next several hours, I anticipate that storms will become more widespread. Then, the primary severe hazard will be damaging winds. Stormcast suggests that the more widespread storm activity will approach Lincoln in the 8PM-midnight time frame. 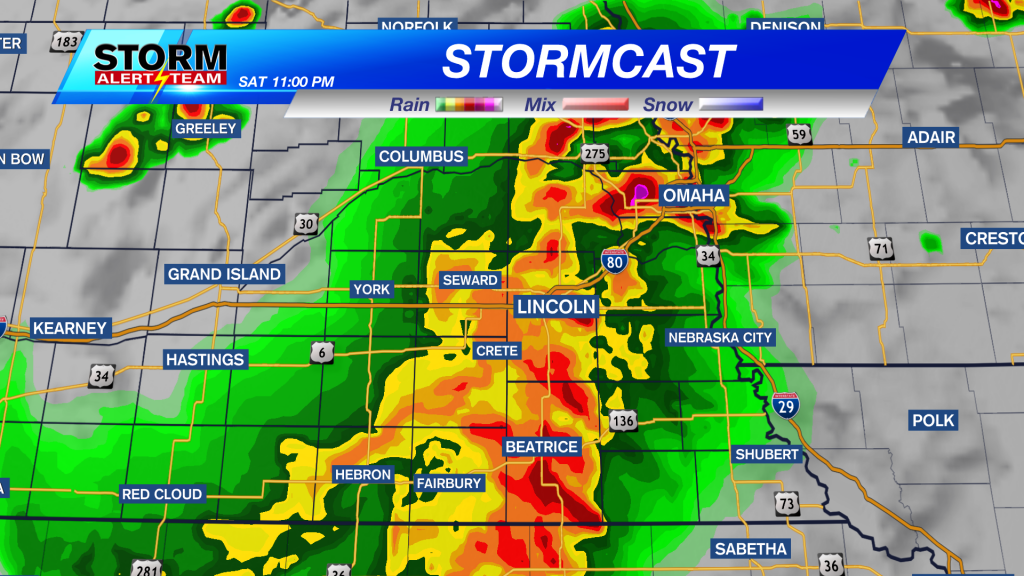 There are a lot of moving parts to this forecast. Know that there is a severe weather potential tonight, but not everyone may see severe conditions. So have multiple ways to receive weather alerts and stay weather-aware this evening!

We’ll continue to monitor conditions throughout the evening.

The Storm Prediction Center has expanded the severe weather risk zone farther south to include Lincoln – as I anticipated on Friday night. 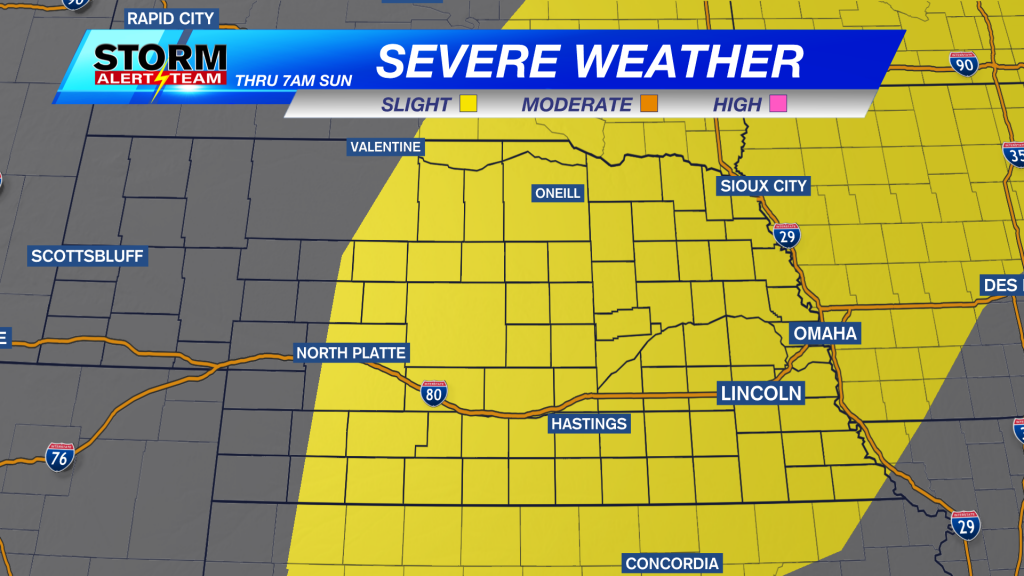 There are some showers and storms on the radar as of Saturday morning. You may hear a rumble of thunder during the morning hours, but these storms should be non-severe. So take the rain gear with you as you head out the door just in case! 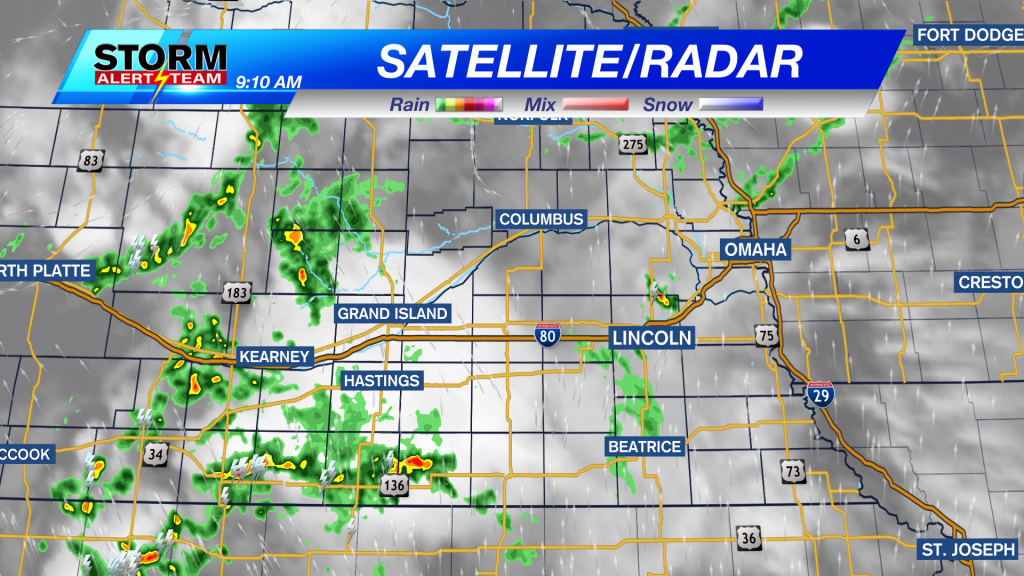 As we go into the afternoon, temperatures will rise and the atmosphere should start to destabilize. This will set the stage for afternoon and evening storms.

We’re forecasting the potential for scattered storms to persist into the afternoon. I think that most afternoon storms will be non-severe. However, if the atmosphere can recover from morning storms and gets “juiced up” enough by late afternoon, I wouldn’t rule out the potential for damaging winds, large hail, and perhaps an isolated tornado with these storms. So keep that in mind, but the overall severe threat is lower in the afternoon.

I think that the better severe weather potential will be later in the evening. By 6-7 PM, we should see some storms developing out west towards the central part of the state – closer to the Tri-Cities. These storms will be more scattered initially, and large hail and/or an isolated tornado cannot be ruled out with these storms.

As we get closer to the 9 PM-midnight time frame, high-resolution computer model guidance suggests that the storms will become more widespread. As this happens, the severe weather threats will transition to less of a hail/tornado threat and more of a damaging wind threat. 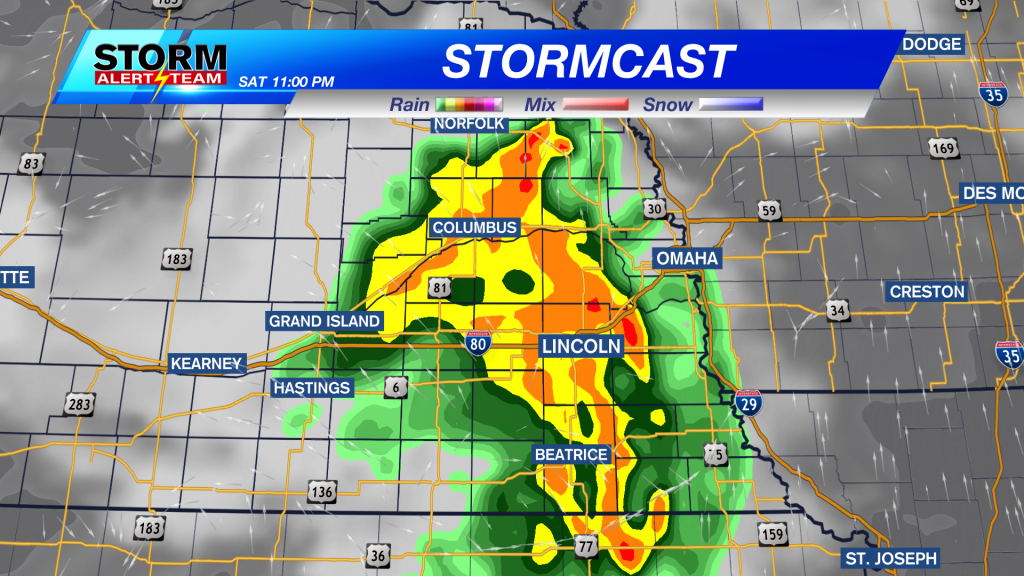 For Lincoln, I think that damaging winds and large hail are the main concerns. We won’t rule out the potential for an isolated tornado. 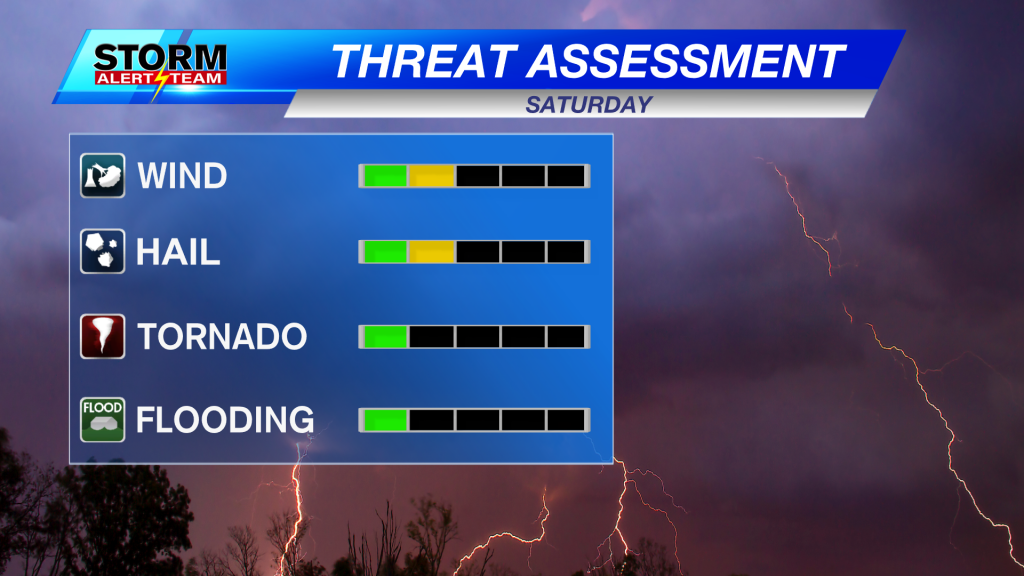 That said, I do not think that this will be a widespread severe weather event. In other words, not everyone reading this article will experience severe weather. However, know that it is a possibility that you may see some severe weather Saturday evening.

I’ll be here throughout the afternoon and evening providing updates on-air and online. Have a way to receive weather alerts and stay weather-aware!