Lincoln Fire and Rescue will be honoring Fire Chief Michael Despain as he retires after 35 years of service in California and Nebraska.

Lincoln Fire and Rescue announced Thursday that a special ceremony for Fire Chief Michael Despain will be held Friday afternoon.

The Chief will be arriving at Station 15 near 66th and Pine Lake Road at 3:30p.m. in a reserve fire engine, with the company of the Pipe and Drum Corp and the LFR Honor Guard. 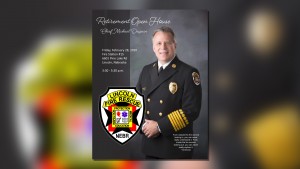 A presentation program will begin at 4:30p.m. with remarks from Mayor Gaylor Baird. The event is free and open to the public.

Chief Despain announced his retirement in October of 2019. Despain came to Lincoln in July of 2016 after a 32-year fire service career in California.

Despain is credited for maintaining one of the best cardiac survival rates in the nation, as well as replacing 13 outdated fire apparatus, implementing the fire station relocation plan and to improving response times by 8%.

Under Chief Despain, LFR received over $3 million in grants and the cost of fire service per capita remained 31% below the regional comparative average, as well as the ratio of female to male firefighters, which is now almost triple the national average. The City’s fire insurance rating was also upgraded for the first time since 1974, reducing costs for property owners.

In March 2019, LFR was nationally re-accredited and remains one of the longest accredited fire agencies in the nation.  The agency has been awarded “Gold Plus” status by the American Heart Association “Mission Lifeline” program in 2017, 2018 and 2019.