LINCOLN, Neb. (KLKN) – Two dogs that were reported to have been stolen over the weekend have now been returned to their owner, Lincoln Police say.

Dallas Welsh reported on Monday that his two dogs were stolen over the weekend after escaping from his backyard near 70th and Thurston during a storm.

Welsh tells Channel 8 that he received a call Wednesday around 4:15 a.m. from the person who had his dogs.  He then went to pick them up shortly after.

“When the guy opened the door where he had them locked up they both came running out and ran right up to me shaking their tails,” Welsh said.

Cuddles, a four-year-old golden retriever, and Oliver, a four-month-old Siberian husky, got out during the rainstorm and were running around the area in neighbor’s yards, police say. 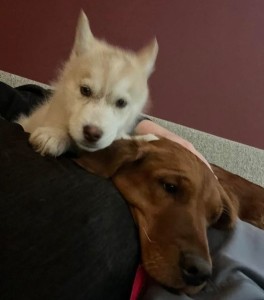 A witness saw a blue Jeep stop, and the dogs jumped into the vehicle, according to police.

The witness reportedly spoke to the driver who said that he has a farm he would be taking the dogs to.

In an original Facebook post by Welsh to a lost pet group, Welsh said, “the guy gave them human food to get them to come to him.”

The owner said that “they are skinnier than what they were when they went missing” but didn’t say who had the dogs or where they were being held.