CENTRAL CITY, Neb. (KLKN) – A van crashed into the State Theater in Central City on Sunday.

Chief Mark Hogue with the Central City Police Department says the van ran a red light, hit a pick-up in the intersection and then veered off the street. He says there were some minor injuries, but no one was taken to the hospital.

The van hit on the north side of the theater.

The theater now has the damage boarded up and added a “no trucks” sign. 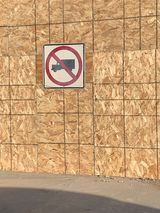 Portion of M Street in Lincoln to close on Tuesday

Gamers from across Nebraska to face off in Esports Summer League