A very comfortable start to Tuesday in southeast Nebraska.  Temperatures dropped in to the middle and upper 50°s.  I hope you took our advice and opened your windows overnight.  Remember to close the windows before you go to work today!

Sunny skies will be the rule for the next two days.  Temperatures Tuesday afternoon will be warmer compared to Monday.  Highs will be in the upper 80°s.  Exactly normal for Lincoln, with a high of 88°.

We go higher Wednesday as temperatures rebound back to the middle 90°s.

One thing you will notice this week is the lack of high humidity.  Don’t get me wrong, there will be humidity but not like last week.  Dew point temperatures – the measure of the moisture in the air – is projected to only be in the lower 60°s through Saturday.

One thing missing from the forecast is rain.  This has been a dry start to August and rain would be helpful to knock down dusty lawns.

Lincoln has officially received just a trace of rain since August 1.  This is the driest first eight days of August in 14 years.  Looking back since the beginning of weather records in the capital city, this now ties for the 10th driest start to August. 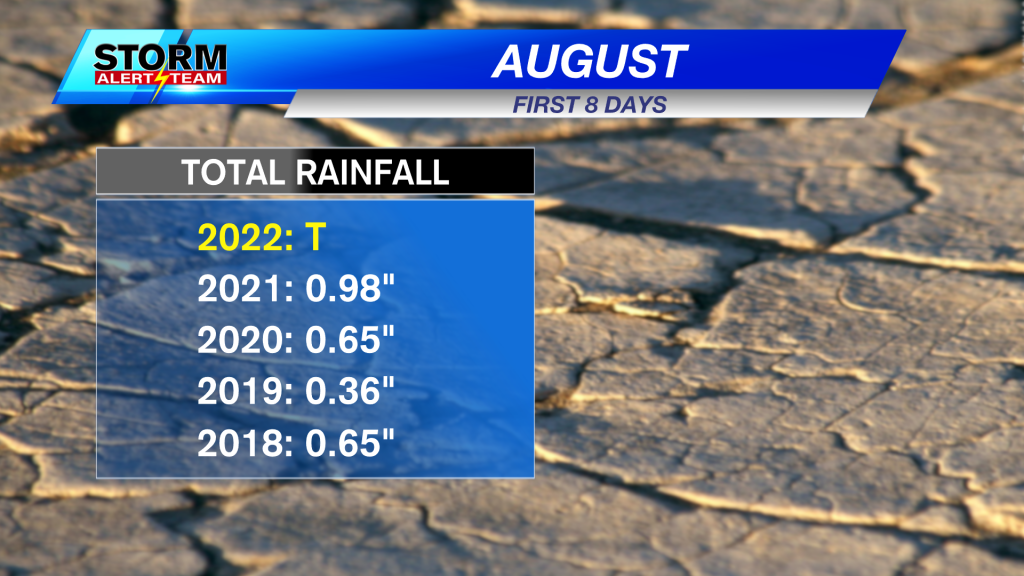 Not much in the way of help is coming from Mother Nature over the next week.  Long range computer models suggests 0.00″ of precipitation for Lincoln through the next 7 Days.  The 8 to 14 day outlook issued by NOAA’s Climate Prediction Center also suggests below normal precipitation for the central United States.

Keep watering if you want to keep things green!