A court affidavit describes the suspect stalking and making death threats to the victim after she ended their relationship.

LINCOLN, Neb. (KLKN) – On Tuesday, two people were found dead after what the Nebraska State Patrol is calling a murder-suicide. Court documents reveal a pattern of abusive behavior from suspect Jason Arnold towards his former partner of ten years, Brooke Koch.

In August of 2020, Koch filed to get a protection order against Arnold.

In the petition dated 8/18/2020, Koch wrote, “On 8/8/2020 I told Jason Arnold I no longer wanted to be in a relationship with him due to ongoing verbal abuse and his admittance to using methamphetamine.”

Koch says Arnold did not leave the residence but she moved to her younger daughter’s room. According to Koch, Arnold made several pleas for her to give him another chance. When Koch held firm to her original stance, Arnold reacted by flipping over a table in anger and acting as him he was going to throw a chair at her. 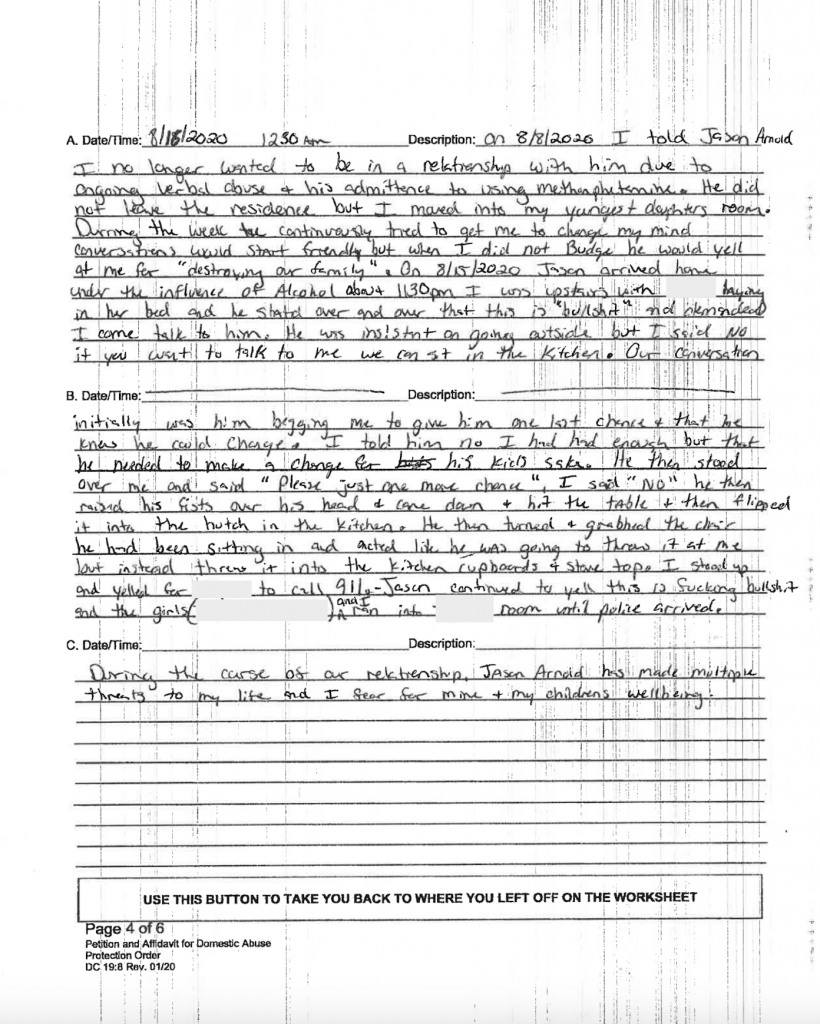 Arnold was arrested on August 16 for third-degree domestic assault and terroristic threats.

An affidavit for Arnold’s arrest states that Koch came to the Gage County Sheriff’s Office on 12/14/20 to report “additional ongoing problems between herself and Arnold.”

Koch described stalking behavior from Arnold when she was away from home and threats to her life when exchanging custody of their child.

In one incident, Koch describes picking up her daughter from Arnold’s mother’s house on Christmas Eve. One of Koch’s other daughters was audio recording the interaction on her cellphone. Arnold is described as appearing drunk and arguing with Koch. Koch says that Arnold told her “something similar to ‘I’m going to blow you away and I should do it right now.'”

A few days later Koch went to pick up her daughter at the Blue Springs Farmer’s Co-Op parking lot. Arnold is described as pulling up door to door with Koch and making the comment, “A little bang bang to you.”

Court documents show a protection order Koch had against Arnold from last year was dismissed, and that she was later granted another one in January. Arnold failed to appear in court for violating that order the same day he allegedly killed her.