We put a close on November and Meteorological Fall Tuesday night.  A new month starts Wednesday, as does Meteorological Winter, but it is going to feel anything but winter.

Partly cloudy skies early Wednesday become mostly sunny by afternoon.  Temperatures will soar to the middle and upper 60°s by afternoon.  This will feel cool compared to Thursday. 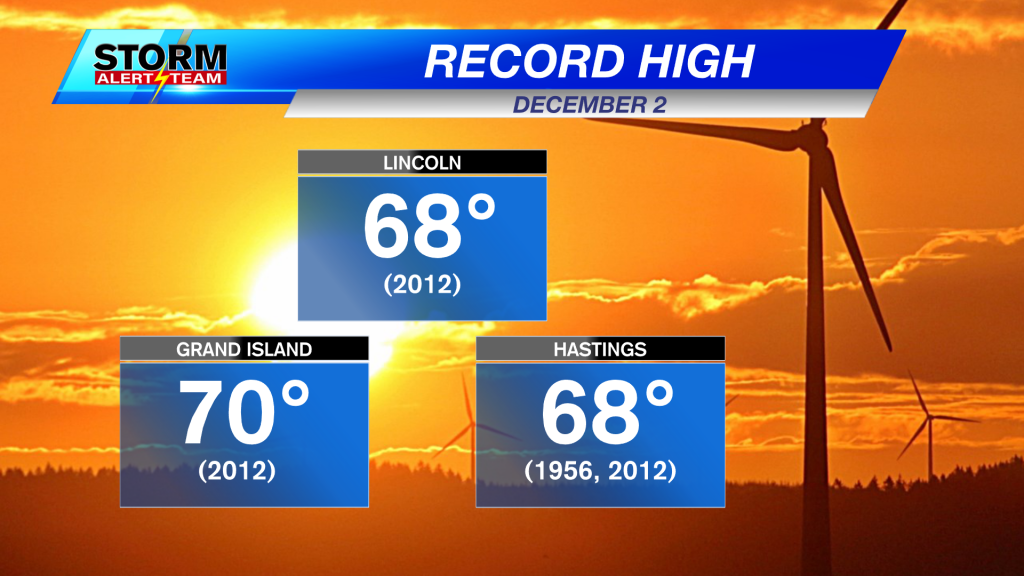 We are likely to smash weather records Thursday afternoon.  Temperatures are expected to climb to the lower 70°s, even some mid-70°s look possible, surpassing record highs in Lincoln, Grand Island, and Hastings.

The extreme warm weather will come to an end Friday as temperatures fall back to the 50°s, but what is interesting about this, temperatures will still be nearly 10° above normal.  The normal high is around 44° at the beginning of December.

Overall, temperatures should remain above normal for most of the next 10 days.  However, the Tuesday morning runs of long range global computer models decided to throw in a wrinkle to the forecast.  They picked up on the potential for a few shots of colder air moving through the Plains Sunday and in to next week.  This is the first time the models have suggested this.  After November ending with a 161° temperature surplus in Lincoln – the city ended November 5.3° above normal per day – I am keeping with a persistent forecast at the moment.  Meaning, I’m keeping the forecast warm at this time.  If I see a consistent trend of colder temperatures coming our way, I’ll be sure to adjust the forecast as needed.

Rain chances to start the week