Feeling more like close of April than open to March

A fantastic day around southeast Nebraska Monday.  All of the area had temperatures in the upper 60°s to near 70°.  The warm weather should last at least through midweek.

One of the more amazing things from Monday was the range of temperatures felt.  It was a day where you truly needed to dress in layers.  Some locales went from morning lows in the upper teens to highs around 69°.  The range from morning low to afternoon high was as much as 51°!  That is a true sign of dry air being in place over the region.

Temperatures will climb higher for Tuesday and Wednesday.  Both days will reach 70°, and perhaps mid-70°s.  It will feel more like late April and early May than early March.  The record high temperature looks safe for Tuesday.  Records are in the lower 80°s.

FEBRUARY IN THE BOOKS

February goes in the weather books as extremely dry.  Only 0.03″ of precipitation officially fell in Lincoln.  That is remarkable!  That low of a precipitation mark ranks as the driest February in 105 years. 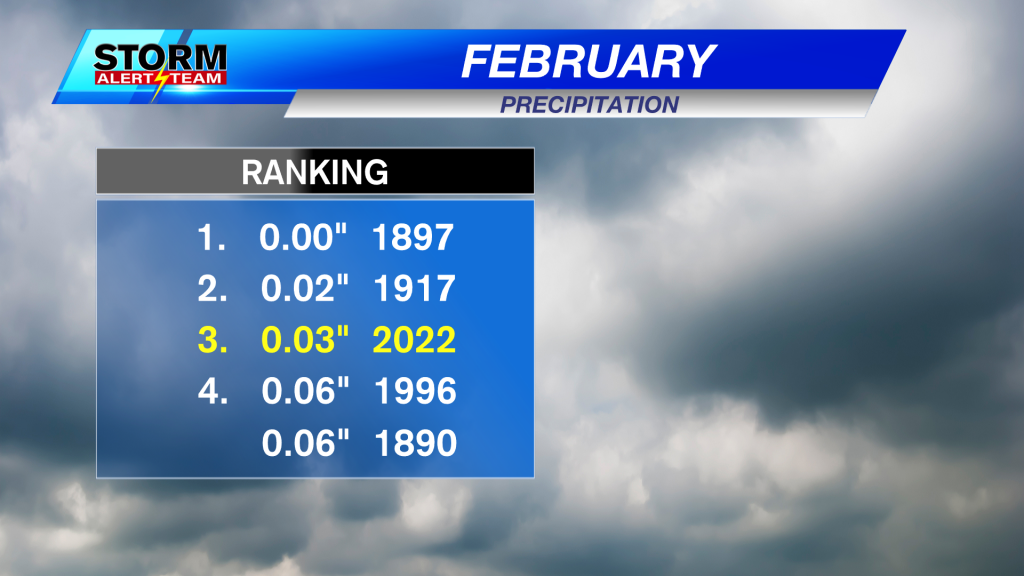 It also ranks as the 3rd driest February on record – back to 1887.  There is rain in the forecast for later this week.  Keep your fingers crossed if you are needing it, which at this point all of us do.

The month also goes in the books very “normal” when it comes to the temperature.  While there was definitely periods of warm and cold, they both evened each other out.  The month will go in the books with a 1° temperature surplus, meaning it was on average compared to the previous thirty Februaries.