Following warmer weather and sunshine on Monday, winter looks to makes its presence known with a stronger system pushing through the state Monday evening through the day on Tuesday. A wintry mix along with impacts to the morning commute are possible for central and eastern Nebraska early Tuesday.

As for the timing as of Monday evening, the Panhandle starts to see light snow first. Winter Weather Advisories currently are in effect for most of the counties in Nebraska, but counties including Lancaster are not of concern until 6 a.m. on Tuesday. 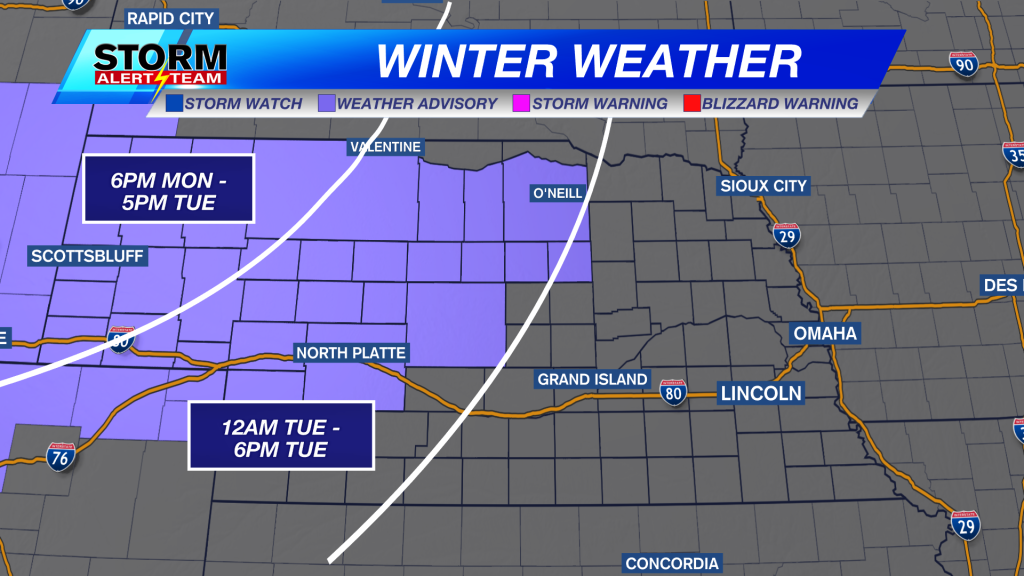 As for southeastern Nebraska, freezing drizzle is possible first as temperatures get to freezing and just below around the timing of this system. Eventually, the precipitation turns to snow later with less than an inch expected in Lincoln and to the south and east. One of the major factors cutting into the accumulations will be the drizzle seen around the area.

If planning to travel, light ice accumulations could cause slick spots during the morning commute. 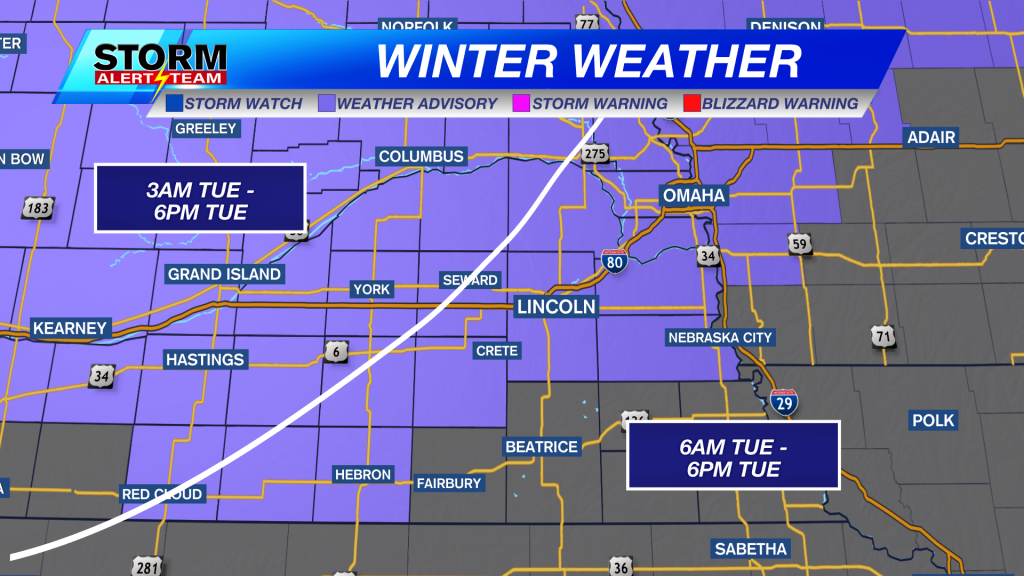 With the timing of this system, our warmest temperatures of Tuesday will be felt right around midnight. From there, we will continue to cool throughout the day and into the morning of Wednesday. The stronger system will be bringing a colder, arctic air mass to our neck of the woods for now. 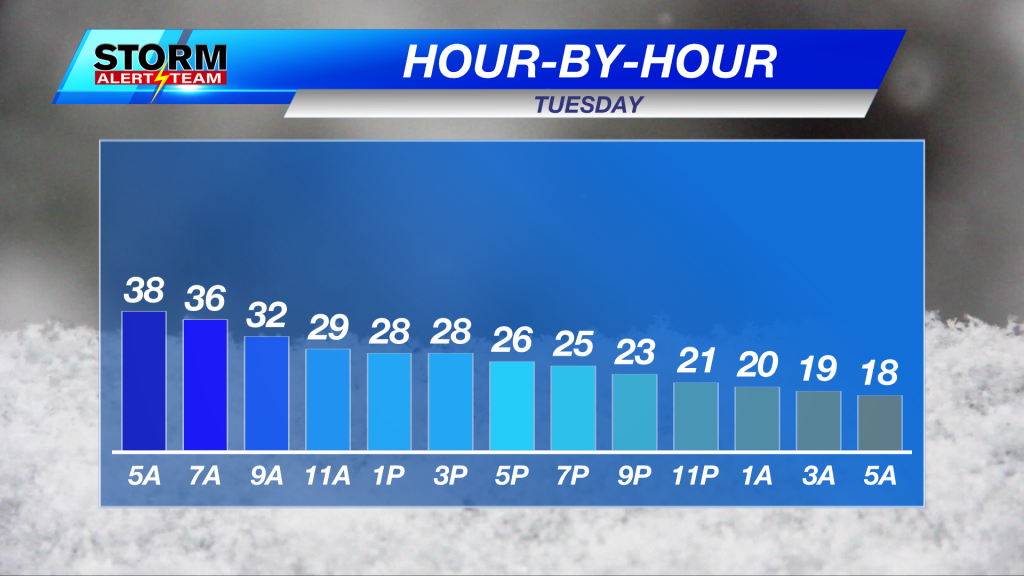 Not only are there winter weather impacts to worry about on Tuesday, but wind chills will also play a role in how cold and miserable the day could feel for most. With winds shifting out of the north behind the front, gusts will be increasing to 35, if not 40 miles per hour as this system comes through. 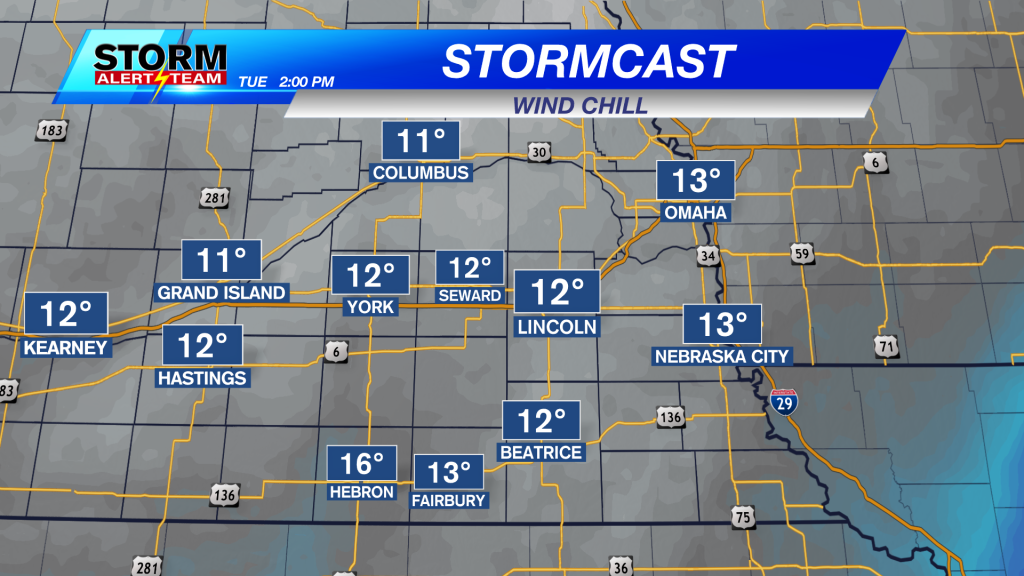 One look from models Monday night shows the insight that northeast Nebraska and western Nebraska are going to see the largest amounts of snow, likely over two inches. Lincoln’s totals even within this run are on the higher side as we experience freezing drizzle first to cut into those totals. 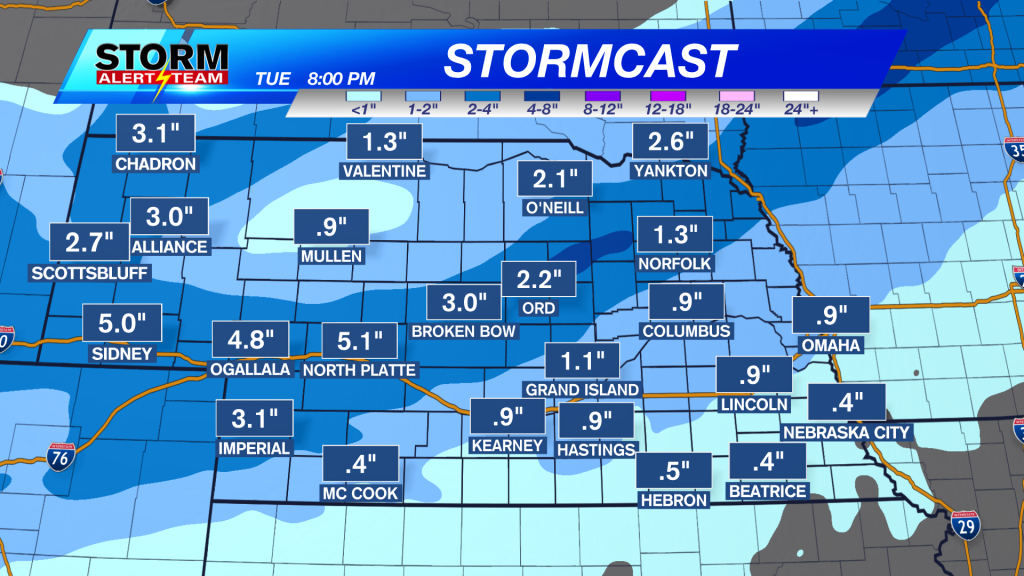 Temperatures will continue to rock the roller coaster with temperatures in the 30s by Wednesday but upper 50s by Friday. Stay tuned to the Channel 8 Storm Alert Team for the latest.