Officers took 41-year-old Christopher McKinney of Palmyra into custody after the hours-long standoff.

Officers took 41-year-old Christopher McKinney of Palmyra into custody after the hours-long standoff. 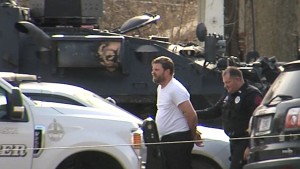 McKinney is currently being held in the Otoe County Jail on warrants for domestic assault, terroristic threats and use of a weapon to commit a felony.

Caudill says the 911 call came in around 3:30 am Wednesday morning, saying there was a disturbance with a man armed with firearms at a residence.

When deputies arrived on the scene, the person being threatened was standing outside of the home, while the 41-year-old male suspect remained inside.

Several deputies made contact with the suspect, who threatened them with firearms.  The standoff started once deputies tried to resolve the threat peacefully before leaving the residence.

Nebraska State Patrol was called in to assist Otoe County Sheriff, and an armored vehicle was brought in as a safety precaution.

After NSP negotiators and others spoke with the suspect, he surrendered at 12:50 p.m., after the lengthy standoff.  Sheriff Caudill says charges will be filed against the suspect.

Palmyra High School was in “Secure” Mode throughout the standoff, after having a 10:00 a.m. late start.

As of 1 p.m., Palmyra High School moved out of “Secure” Mode.

UPDATE: NSP has taken a male into custody around 12:50, responders are beginning to collect their equipment. According to NSP, the standoff ended in a peaceful resolution.

UPDATE: NSP brings a light armored vehicle to the area, the standoff has continued for more than nine hours.

UPDATE: A reporter is on the scene and says that a Nebraska State Patrol SWAT team is currently surrounding a blue house.

The standoff began at 3:30 am this morning following police response to the home following a report of a dispute.

Out of an abundance of caution, Palmyra High School is in “Secure” mode until further notice, there is no threat to the school.

“Secure” mode means no person will be allowed in or out of the high school building until the school district is notified by law enforcement officials that the situation outside the school has been completely resolved.

According to Palmyra School District, Palmyra High School started at 10:00 am today due to a safety concern regarding an active police presence in a home near the school.

Students are currently at school and Palmyra High School is not in lockdown.

This is a developing story, stick with Channel 8 for updates.