Two suspects stole weapons, vehicles before leading police on a high speed chase that resulted in a shootout.

On the afternoon of February 28 at about 2:56 p.m., Muskogee police received a panicked phone call from a car hijacking victim.

“Somebody just tried to hijack my car!” the victim is heard saying over emergency dispatch.

The victim described one female and one male suspect, both wearing dark hoodies.

Less than 20 minutes later, police received a second call, only half a mile away.

“They just stole our truck out of our driveway,” the second victim said.

“Who stole your truck?” the dispatcher asked.

“Two people, a man and a woman,” the victim responded.

Moments later, an officer identified the truck that had been stolen.

The officer ordered the suspects to get out of the vehicle. They refused and drove north.

The officer quickly got in his vehicle. A police chase commenced. 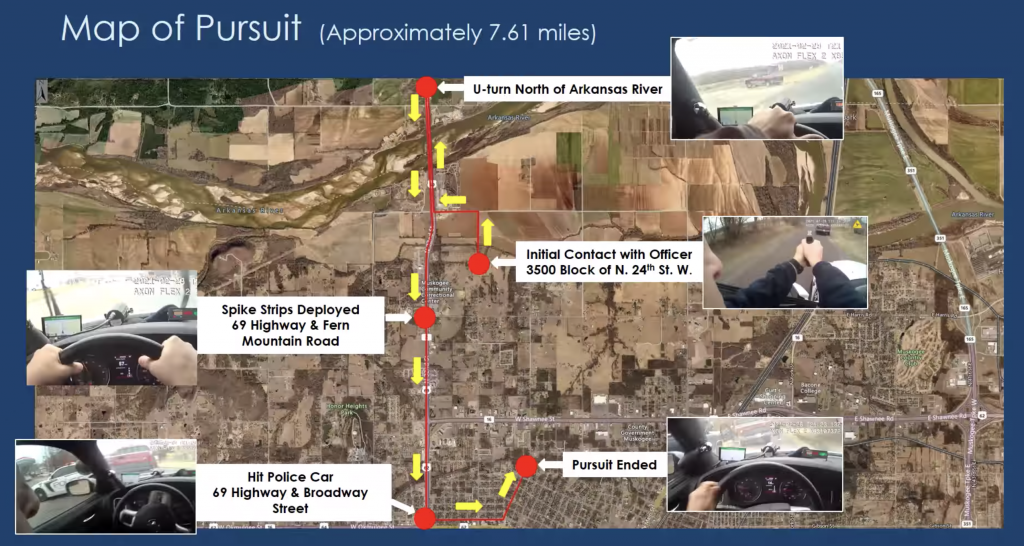 After a police chase that spanned seven miles, the pursuit ended. The video appears to show the vehicle blew a tire, which forced the suspects to stop. The armed suspects quickly fled the vehicle in opposite directions as police chased after them.

One officer warned that he was going to tase the suspects. The female suspect responded by fire shots back at the officers.

Despite repeated demands to drop her weapon, the suspect continued to fire. Police returned fire and ultimately killed her.

As for the male suspect, he ran off into a dense wooded area. Officers established a perimeter and used a drone to try and locate the suspect, who committed suicide as officers approached.

The Muskogee Police Department Investigations Division is in the process of preparing a report and submitting digital evidence for the district attorney to review. He will determine if the use of deadly force was justified.