This is the second African elephant calf born at the zoo in January.

OMAHA, Neb. (KLKN) – Omaha’s Henry Doorly Zoo announced the birth of an African elephant calf on Monday, the second one in January.

Claire, a 13-year-old African Elephant gave birth to the male calf at 9:08 p.m. on Sunday. The zoo says the mom and calf are doing well.

Staff noticed an increase in progesterone levels and behavior changes over the weekend and began a 24-hour-watch for Claire.

The two calves born at the zoo are the first and only African elephants born at Omaha’s Henry Doorly Zoo.

The zoo will keep the Elephant Family Quarters closed to the public as the staff observes bonding, maternal behaviors and nursing. 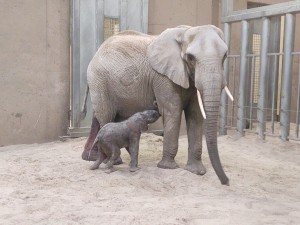 Eugenia, the first African elephant calf born at the zoo, was born on Jan. 7.

Once the Elephant Family Quarters are reopened, visitors will be able to reserve a timed ticket to see the elephant calves.

Streets Alive brings people together for a day of fun outdoors