LINCOLN, Neb. (KLKN)- A House Intelligence Committee official says the Trump-era Justice Department tried to get private information about Democrats on the panel.

ABC News confirmed with four sources familiar with the investigation that prosecutors with former President Trump’s Justice Department subpoenaed Apple for data from at least two Democrats who served on the House Intelligence Committee, as well as aides and their family members, one of whom was a minor.

The Justice Department was reportedly trying to figure out who leaked information to journalists about contacts between Russian and Trump associates. The panel is trying to get the DOJ to explain what happened.

This story was first reported by The New York Times.

In May, the committee was told the matter had been closed, but a House Intelligence committee official said that the DOJ hasn’t provided information on whether the subpoenas exclusively targeted Democrats.

One of the Democrats whose records were seized as part of the investigation, House Intelligence Committee Chairman Adam Schiff called for an inspector general investigation on Thursday after the reports.

“President Trump repeatedly and flagrantly demanded that the Department of Justice carry out his political will, and tried to use the Department as a cudgel against his political opponents and members of the media,” Schiff said in a statement. “It is increasingly apparent that those demands did not fall on deaf ears. The politicization of the Department and the attacks on the rule of law are among the most dangerous assaults on our democracy carried out by the former President.” 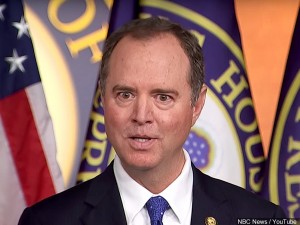 “Though we were informed by the Department in May that this investigation is closed, I believe more answers are needed, which is why I believe the Inspector General should investigate this and other cases that suggest the weaponization of law enforcement by a corrupt president,” he added.

A spokesperson for committee Republicans chose not to respond to inquiries into whether GOP members of the panel were similarly targeted or notified.

A Democrat from California, Rep. Eric Swalwell, another member of the House Intelligence Committee, told Don Lemon, a CNN host, that he was the second Democratic lawmaker that was targeted by the Trump-era DOJ via Apple.

“I was notified, Don, by Apple that they did seize my records,” Swalwell told CNN. “It’s wrong. It is what they do. They smear and they try to clear. We have seen this through the justice department by Donald Trump, whether it was the reason he was impeached for trying to go after vice president Biden at the time or just other efforts, you know, through the Mueller investigation. And I support chairman Schiff’s call for an inspector general.”

This year, a gag order that was the Justice Department secured on Apple expired, so lawmakers didn’t realize they were being investigated until Apple informed them of it last month, according to multiple sources. Apple has not given any comments to ABC News.

The only things Apple has turned over are metadata and account information, but not photos, emails, or other content, one person familiar with the inquiry said.