What causes damaging winds in storms? 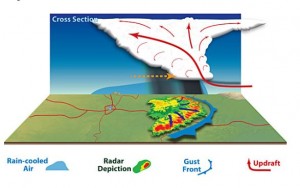 Last night we saw wind gusts get up to 79 mph in parts of Nebraska when a large line of storms pushed into the region. Tree branches broke, trash cans were pushed down the block and many people were left without power. What exactly causes the wind in storms to become so strong and damaging?

There are several factors that determine how strong winds can become within a thunderstorm and a main component is the overall structure of the storm itself. A specific term that meteorologists use for storms that produce damaging winds is a derecho. A derecho is when a line of showers or thunderstorms form into a bow shape that results in damaging winds at the center of the storm. Several bowed storms formed last night, ultimately producing a large derecho that resulted in damaging wind gusts up to 79 mph. If you want a further breakdown to how derechos and bow echos form, check out weather.gov.

Stay weather aware tonight as another round of severe weather is expected in southeast Nebraska. The Storm Alert Team will continue to keep you updated on social media as well as on klkntv.com/weather