What’s the difference between Partly Cloudy and Partly Sunny?

LINCOLN, NEB. (KLKN) — For starters, partly sunny can only be used during the day. However, according to the National Weather Service, partly cloudy and partly sunny mean exactly the same thing.

The NWS definition states that between 3/8 and 5/8 of the sky is covered by clouds when it’s classified as partly cloudy or partly sunny. Sometimes, a “mix of sun and clouds” is used by some forecasters instead of “partly sunny” during the daytime hours, though it is not an official NWS term.

As you may have guessed by now, mostly cloudy means there are more clouds than sun (or stars, at night). The NWS definition says the sky is classified as mostly cloudy when 3/4 to 7/8 of the sky is covered by clouds, and it can also be referred to as “considerable cloudiness.”

One of the most misused weather terms is “fair.” The NWS uses “fair,” typically at night, to describe less than 3/8 cloud cover, with no precipitation and no extremes of visibility, temperature or winds. It describes generally pleasant weather conditions. 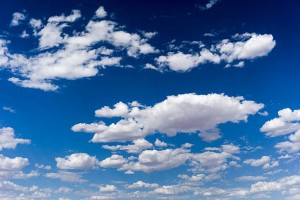