Hutchins was transported via helicopter to University of New Mexico Hospital in critical condition where she later succumbed to her injuries, according to the sheriff’s office.

Souza, was brought by ambulance to Christus St. Vincent Regional Medical Center and was receiving emergency care but was later out of the hospital.

Santa Fe County Sheriff’s spokesman, Juan Rios, said detectives were investigating what type of projectile was discharged and how. No immediate charges were filed.

Baldwin made a statement in a Tweet regarding the incident, “There are no words to convey my shock and sadness regarding the tragic accident that took the life of Halyna Hutchins, a wife, mother and deeply admired colleague of ours… I am in touch with her husband, offering my support to him and his family.  My heart is broken for her husband, their son, and all who knew and loved Halyna.” 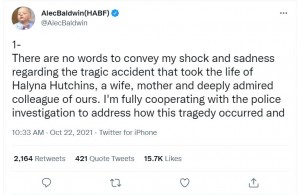 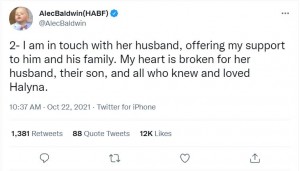 First Judicial District Attorney, Mary Carmack-Altwies states, “This case is still in its preliminary states of investigation. We are assisting the Santa Fe County Sheriff’s Office and have offered our full support to them. At this time, we do not know if charges will be filed. We will look into all facts and evidence of the case with great discretion and have further information at a later time. Our thoughts are with all affected by this tragedy.”