The NDOT says it will replace the intersection with a roundabout instead of the current traffic lights.

WAHOO, Neb. (KLKN) — The Nebraska Department of Transportation (NDOT) announced on Wednesday it will update the intersection of U.S. Highway 77 and Highway 109 near the Wahoo airport. 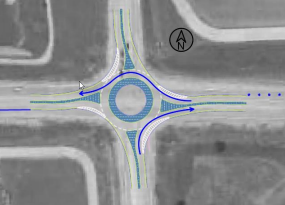 The NDOT says it will replace the intersection with a roundabout instead of the current traffic lights. It will begin construction in the summer of 2022.

In July of this year, one teen and two children from a Wahoo family were killed in a car crash.

Here is the full press release from the NDOT:

“Nebraska Department of Transportation (NDOT) has completed a review of the intersection of U.S. Highway 77 (US-77) and Highway 109 (N-109), near the Wahoo Airport. This video review was conducted to examine existing conditions and driver behavior, and it was determined that while this intersection was designed and constructed to standard highway criteria, modifications to the intersection will improve the intersection’s performance.

NDOT met with local, county and state law enforcement and elected officials to discuss about the results of this review, and together agreed upon a number of modifications for this intersection that will begin as early as November.

NDOT will begin work to close approach lanes in the east and west approaches on US-77 to three lanes at each leg (left, through and right). The north and south approaches on N-109 will be reduced to a single lane. In addition, the speed limit through the intersection will be reduced to 50 mph. Drivers can expect to see different lane markings, traffic control devices and signage to help understand these changes.

In Summer 2022, NDOT will modify the intersection to a modular roundabout design. Roundabouts reduce the most severe crashes by requiring drivers to slow down while also minimizing traffic delays. The modular roundabout modification will be similar to the one constructed at the Pleasant Dale roundabout south of Interstate 80 on N-103, and will fit within the existing footprint of the current intersection. It will also still accommodate tractor-trailer vehicles. This is anticipated to take approximately three months to complete and would include minor pavement work to strengthen the shoulder.”

Portion of M Street in Lincoln to close on Tuesday