Snow will quickly melt over the next couple of days as afternoon temperatures will remain above freezing, and well above normal, through early next week.

It starts Friday where temperatures will surge in to the 40°s ahead of a cold front.  The front should begin to pass through southeast Nebraska late afternoon and be out of the area by late night.  While the front should pass through mainly dry, I can’t rule out the chance for a few sprinkles just behind it.

Saturday will have a slight dip in temperatures but with sunny skies I think temperatures will be able to rebound back to the upper 30°s to lower 40°s.

Sunday looks to be the best day of the weekend.  Skies turn partly cloudy during the afternoon and temperatures should find their way back to the upper 40°s.  Even a few 50°’s will be possible.

One thing to keep in mind for Friday through Sunday.  If you live in a location that has a bit more snow, temperatures will likely be on the cooler side of my forecast.  Once it all melts, you’ll join the rest with warmer temperatures. 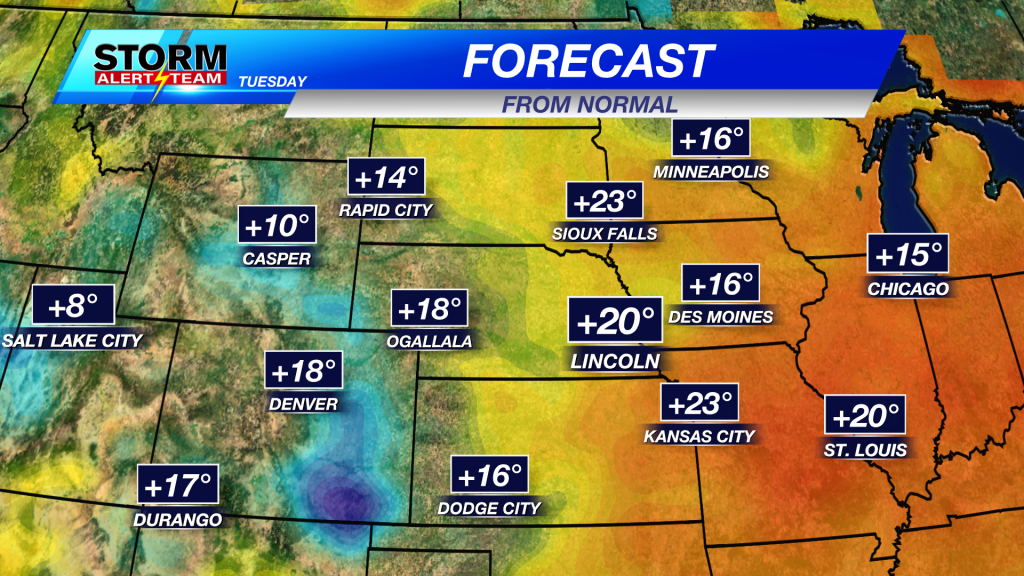 Monday and Tuesday will continue with warm temperatures.  Monday should be around 50° but Tuesday will be the warmest day through Christmas.  As you can see from the map above, temperatures will be upwards of 20° above normal in the Midwest.  That equates to high temperatures in the middle 50°s in southeast Nebraska.

Long range computer models continue to advertise a shot of cold air coming to the central United States around Christmas Eve and Christmas.

Cold air is beginning to pool over northern Canada where temperatures Thursday evening are well below zero.  For example, Yellowknife, Canada is -36°F at 7 p.m. CST. 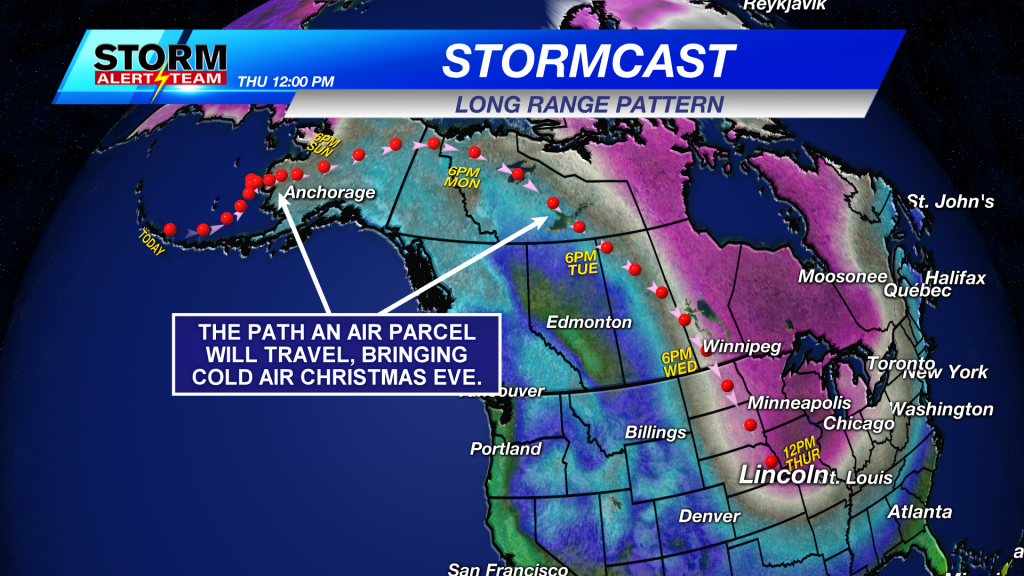 This is a trajectory forecast from one of the long range computer models.  This shows the path a parcel of air will travel over a period of time.  In other words, the air that will bring the cold to Nebraska is residing over the Aleutian Islands of Alaska.  It will pass over interior Alaska this weekend.  Then over northwest Canada at the beginning of the week.  It will then head south before passing over the United State/Canada border, eventually reaching Nebraska, Iowa, Minnesota, and Wisconsin Thursday.

At this distance it looks like this could be one of the Top 25 coldest Christmas Eve’s with highs in the low 20°s.  Christmas morning also looks cold with temperatures in the single digits to near 0°.

Stay tuned!  We’ll be updating the forecast daily as we head towards the Christmas holiday.