PHOTOS: Jewelry shop targeted for a second time in a year

Lincoln Police and a local jewelry shop are hoping to find a person responsible for stealing thousands of dollars worth of jewelry.

LINCOLN, Neb (KLKN) – For the second time in just over a year, Elder Jewelry is recovering from thieves breaking into their shop, located near 29th and Pine Lake Road.

“Someone had busted in the back door and a showcase in the back, they got some sterling silver items,” said store owner Kim Elder on Thursday afternoon.

Thursday morning, the alarm at his shop went off around 4:30 after a person covered head to toe in layers threw a brick through the back door, shattering the glass and then entering the business.

Security video on the building caught the thief riding his bike past the shop several times before stopping to break in. 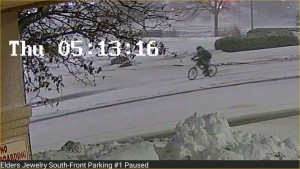 “It is frustrating you know, you have security, you have cameras, you try to do whatever you can do,” Elder said. “I don’t know if it’s a sign of the times…I mean it’s hard for everybody, we have a pandemic some people may be out of jobs – I don’t know.”

Since starting his business in 2013, Elder says at times, he’s gone years without any security issues at all.

But since last January, they have been both burglarized and held at gunpoint.

“It was towards the closing hours of the day, the guys came in, one appeared to have a gun,” Elder says about the robbery from January 2020. “The police were here quickly, the guys got separated and they got caught.”

The two suspects from that incident have since been arrested and charged with robbery.

However, police are still searching for the person responsible for Thursday’s burglary. They made off with a few thousand dollars worth of silver items and left behind a trail of evidence and hundreds in damages.

Elder says these incidents leave them frustrated, tired, and wondering if it’s ever worth it for these criminals.

“I would think there would be an easier way to make a living than to ride your bike in a snowstorm and bust in stores.”

Cozad woman arrested after pursuit with Nebraska troopers near Lexington