TODAY:  Clouds will be on the increase today.  Expect to see overcast skies by late afternoon.  Temperatures will top out in the low 40°s.  Lincoln High Temperature: 42°

TONIGHT:  Cloudy skies and cool.  Low temperatures in the upper 20°s to around 30°.  Lincoln Low Temperature: 30°

SECOND HALF OF WEEKEND TURNS MESSY

Quiet weather will start to change as we go through the day Sunday.  Snow will begin to fall over far northern and northwestern Nebraska overnight Saturday in to Sunday.  The band of snow will spread south/southeast throughout the day.  Once the precipitation reaches I-80, areas south of the interstate should start out as rain before changing over to snow later in the day/evening.

There remains some question as to how quickly the precipitation reaches the ground south of I-80.  High resolution computer models suggest there could be a shallow layer of dry air (below 3,000ft).  That means as precipitation falls in to the layer, it will evaporate.  Once this air mass becomes saturated the precipitation can reach the ground.  It could take a few hours for this to happen. 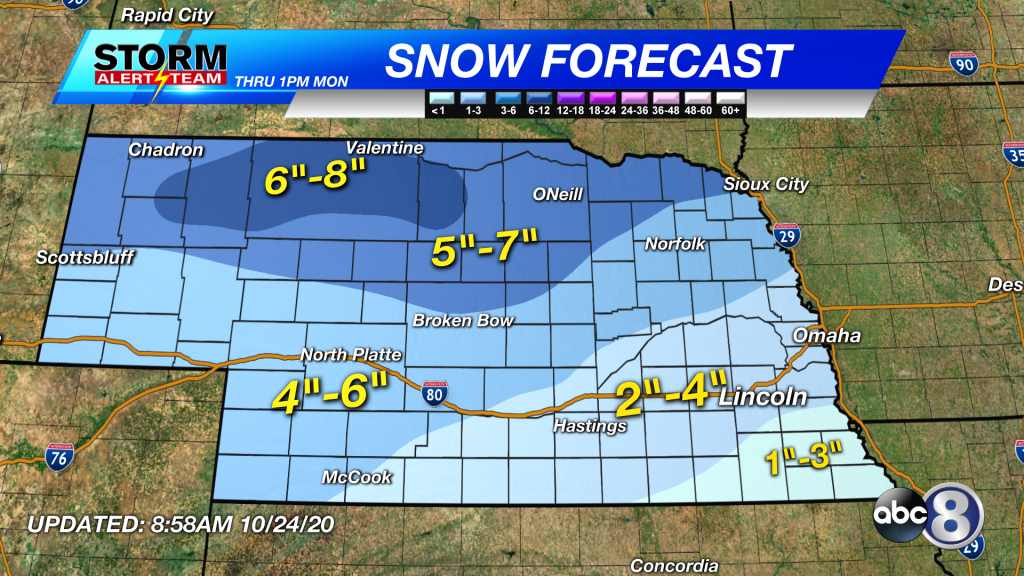 This is what I think could be the final product by Mother Nature after the snow winds down Monday morning.  Heaviest amounts should be over the northern third of the state.  In the KLKN-TV viewing area, highest amounts should come in from north of the Platte River.

If you get out and take pictures/videos of the snow and post them on social media, be sure to use the hashtag #StormAlert8 so we can see them.  Also, if you can hold your phone horizontally that is even better!

Be sure to tune in to future newscasts and here at KLKNTV.com for further updates as the Storm Alert Team will be making adjustments to the snow forecast, and the timing of the precipitation, as needed.

High temperatures 25° above average on Monday

Temperatures will continue to remain well above average

Temperatures will be cooler this weekend but it remains above normal

For Norris quarterback and Husker walk-on, there's "no place like home"

Horse spotted galloping on the loose around southeast Lincoln neighborhood