Today’s space launch and why was it scrubbed? 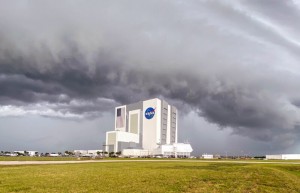 The big space launch was originally supposed to take place today at 3:30 p.m. local time, but unfortunately the weather didn’t want to cooperate.  Weather plays a major roll when it comes to rocket launches and 12 different criteria must be met in order for a launch to take place. A few of these include having sustained winds at or below 30 mph, mainly cloud free conditions and a lack of thunderstorms at least 10 nautical miles away from the launch pad. So what canceled the launch today?

Just off the east coast of South Carolina, Tropical Storm Bertha is stirring up the atmosphere and has played a major role in the forecast for the launch. But on top of the tropical storm, several storms have been moving through Florida today since the early afternoon hours. As a result, the launch was canceled by the 45th Space Wing due to unfit weather conditions. The rain from the storms and gusty winds would have interfered with liftoff itself, but turbulent ocean conditions and rain would also have posed problems for escape systems to work properly.

The launch of the spacecraft, Dragon, has been rescheduled for this upcoming Saturday at 2:22 p.m. local time and will be showed live through KLKN.

One hospitalized after fire at Lincoln apartment building