Winter storm will move through Nebraska on Wednesday into Thursday morning

Winter Storm Warnings (pink) and Winter Weather Advisories (purple) are in place for ALL of Nebraska. 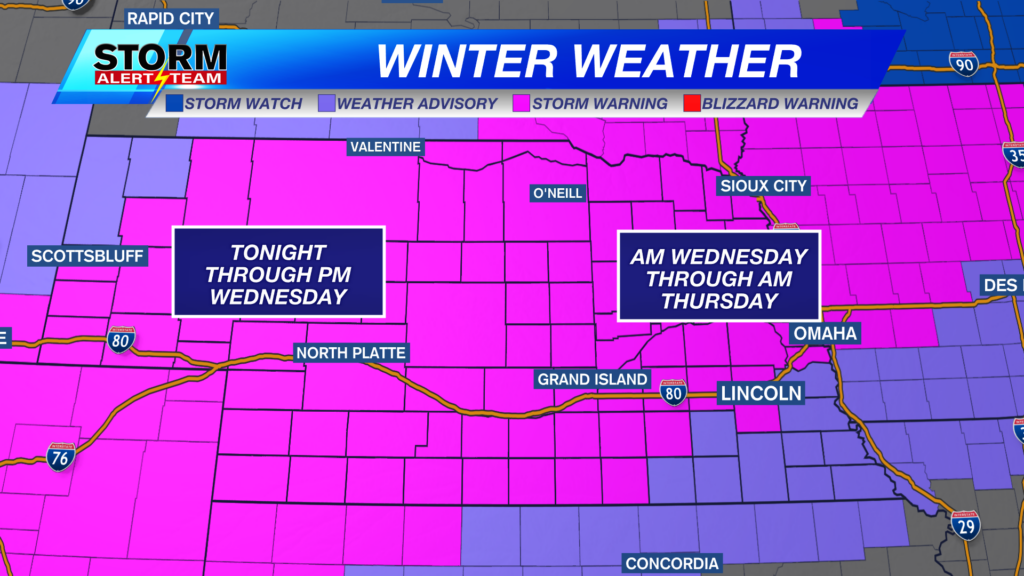 The snow starts in southwest Nebraska on Tuesday night. It makes its way into central Nebraska overnight, then into eastern Nebraska by around sunrise.

The snow will last through much of the day Wednesday for the western half of the state and into Thursday morning for the eastern half. Southeast Nebraska may have that rain/snow/ice mix to deal with on and off Wednesday. 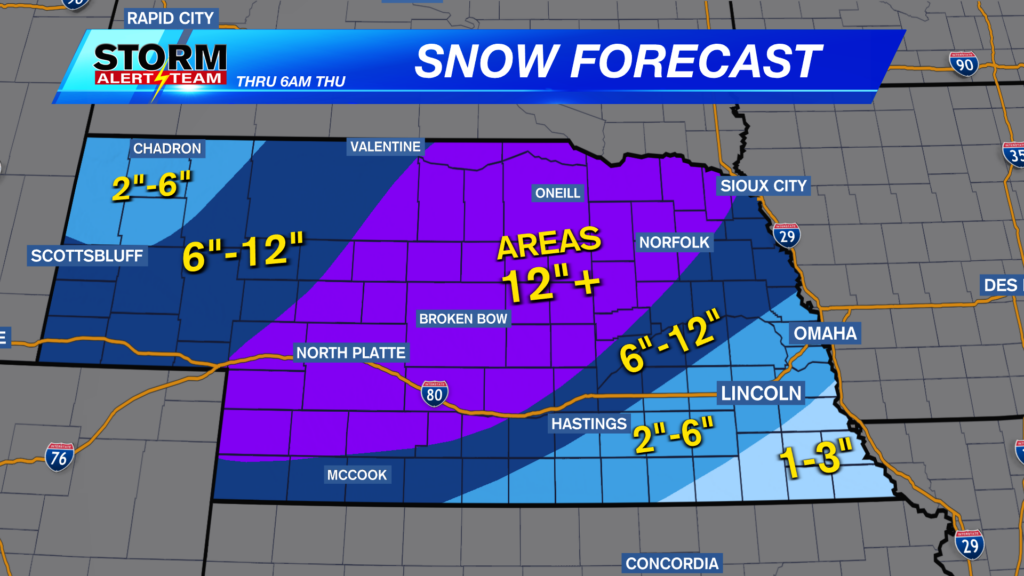 The most snow will be in the purple shaded 12-inch-plus area. Some snow totals will come very close to 2 feet in this area.

There is going to be a chance for a wintry mix in the southeast corner of the state, so the snow potential is a lot lower. Freezing rain and sleet will limit the snow totals in this area.

From Omaha to Lincoln to Beatrice and much of southeast Nebraska may see this mixed precipitation, thus the 1-to-3-inch and 2-to-6-inch potential. However, if the freezing rain changes over to snow earlier, higher snow totals will be possible. We’ll keep an eye on that for you!

While wind will be somewhat of a concern, it won’t be in the blizzard category. Open areas (especially along the open areas of Interstate 80) will be prone to some drifting. 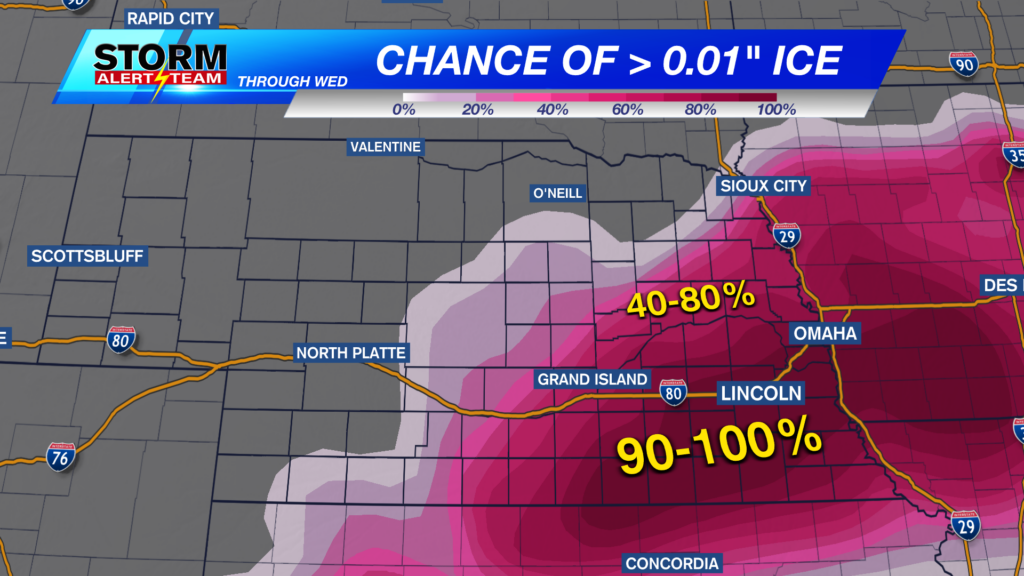 The chance for freezing rain is high. Much of the eastern half of the state may see a little of it, with the much better chance in southeast Nebraska. This is the main reason for the lower snowfall potential. 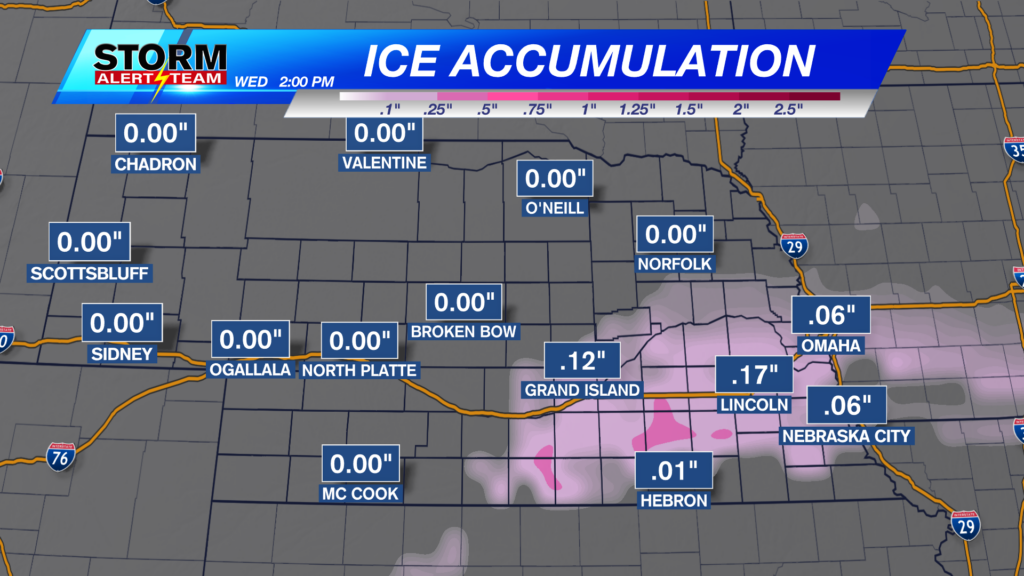 South-central and eastern Nebraska have the best chance of freezing rain. We are looking at the potential for 0.01 to 0.2 of an inch of accumulation. Again, this is what will hinder bigger snowfall totals. 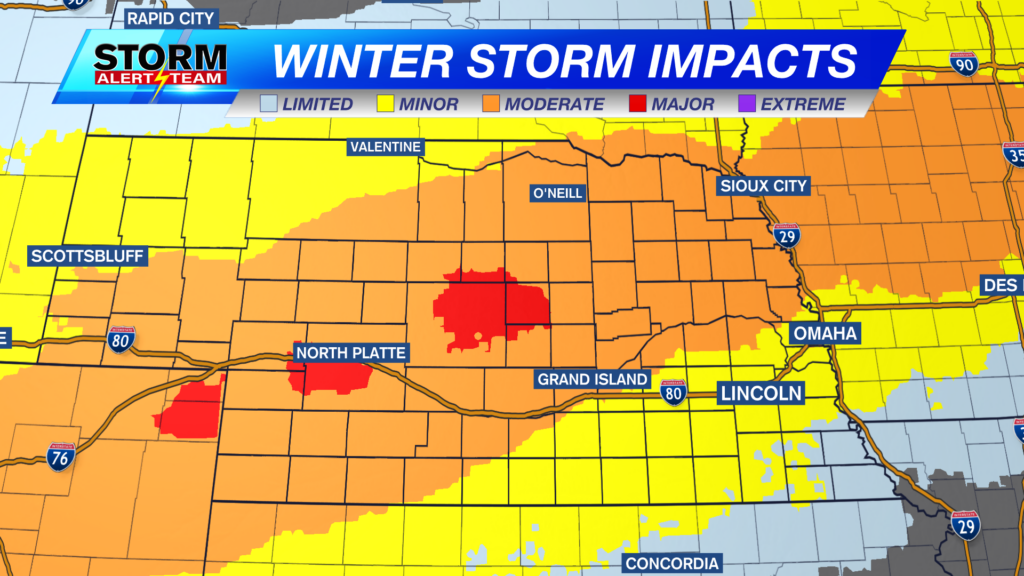 Overall, the heavy, wet snow will have the biggest impact on everyone. The areas above in orange and red will be affected the most, with travel likely difficult to impossible.