Sunday was likely one of the last pleasant, sunny days in the 50s through the end of the year. Starting overnight, more clouds are going to roll in and blanket the skies ahead of our next system starting with dense fog and a breeze through the night.

A Dense Fog Advisory has been issued for counties just to the west of Lincoln and Lancaster, along I-80 until about North Platte. Visibilities are expected to drop below a mile and even below 1/4 mile in some spots. The advisory is currently in effect for 9 p.m. Sunday evening through noon on Monday.

As of Sunday evening, a Freezing Fog Advisory has been added for central Nebraska that will go into effect after midnight. Slick spots are possible under these conditions, including during Monday’s commute as these advisories both extend to noon on Monday. 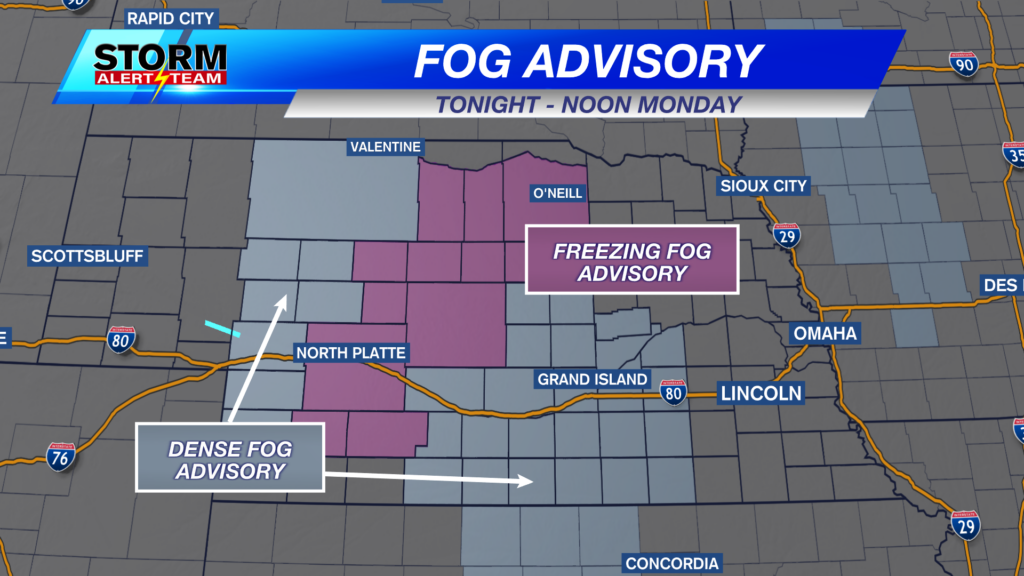 With the possibility of fog, eastern portions of Nebraska are likely to see drizzle early on Monday with mostly cloudy conditions. Monday will be on the windier side with gusts over 30 mph.

The drizzle turns to better rain chances going into the evening hours on Monday with storms possible after midnight into Tuesday. Patchy fog will also be likely to start the day on Tuesday, as rain chances continue. 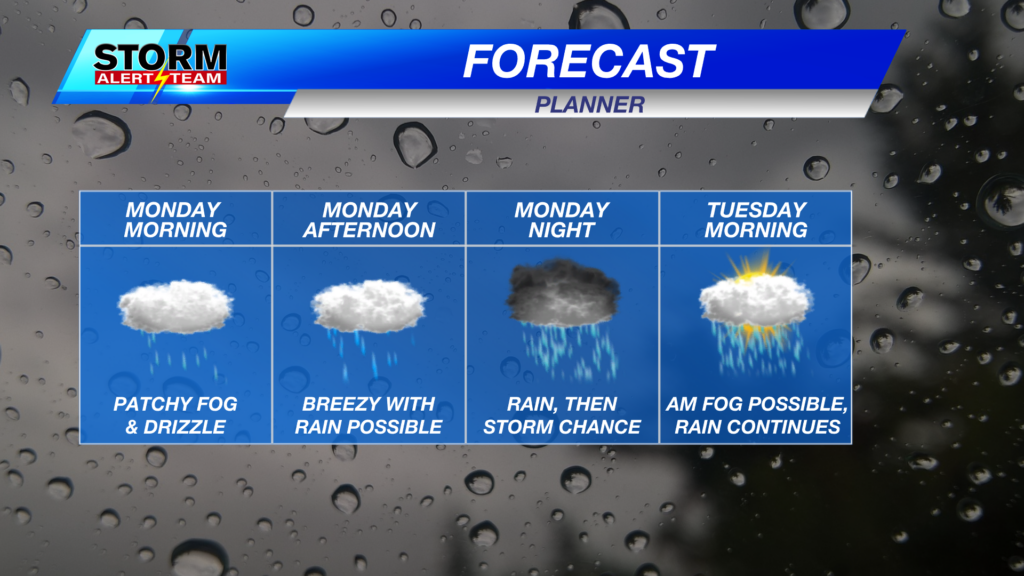 Monday evening and beyond

Our next system forms in central Nebraska, bringing rain and snow by the late afternoon into the evening hours Monday.

Western portions of the state will remain on the colder side of the system, with strong north winds and continued snow. Eastern Nebraska will be on the warm side with rain chances and a few thunderstorms possible.

With the system circulating over the state for some time Monday through Wednesday, eastern Nebraska could see some better precipitation out of this system while snow piles up in the west. 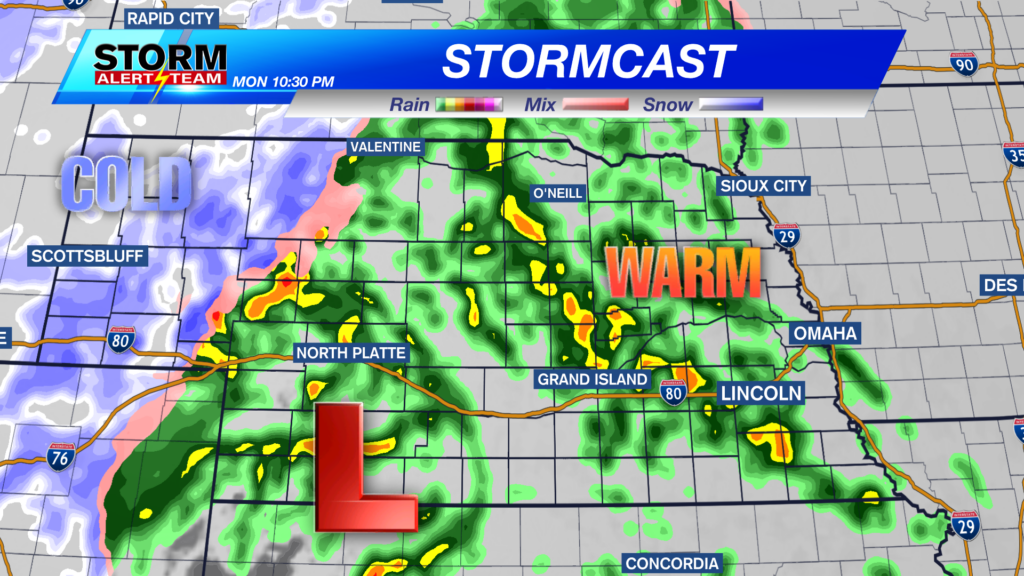 Winter Storm Watches are still in effect now for most of the Panhandle from Monday to Wednesday night. Impacts in these areas include heavy mixed precipitation, snow amounts around 3-10″ and gusts up to 50 mph. These counties in blue (below) could be updated to Winter Storm Warnings or Blizzard Warnings as we get closer to Monday evening.

Blizzard Warnings are now posted for extreme NW Nebraska for higher snow totals (~10-18″) and gusts up to 55 mph. A light glaze of ice is also possible for these areas. Overall, this system is one of the stronger ones to come through Nebraska yet this season, as a lot of moisture and strong winds are associated with it. 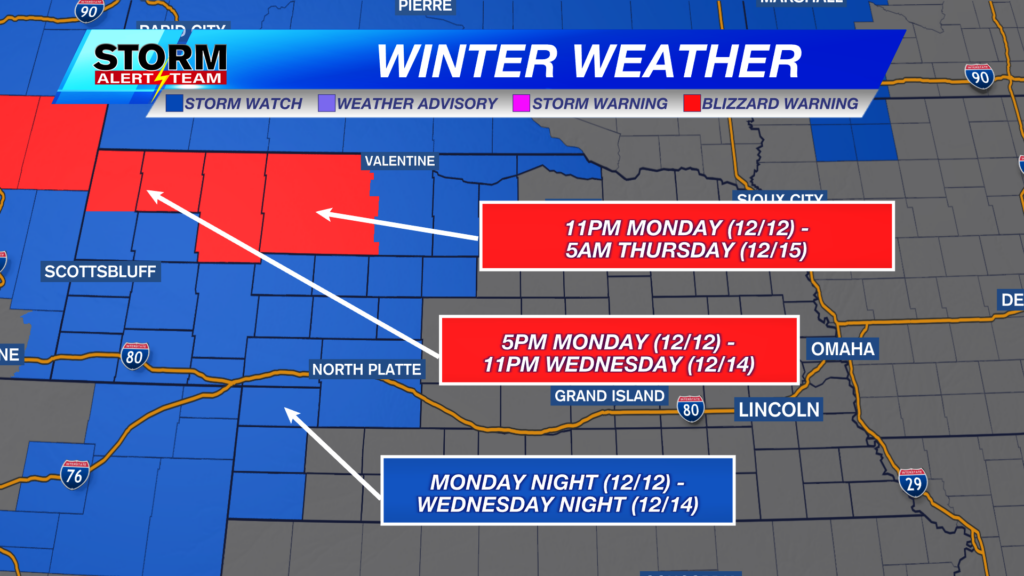 Much of us could see some beneficial rain from this stronger system moving through our state. Take this one model (below) with a grain of salt, but 0.5 – 1″ of rain is not out of the question through Wednesday. 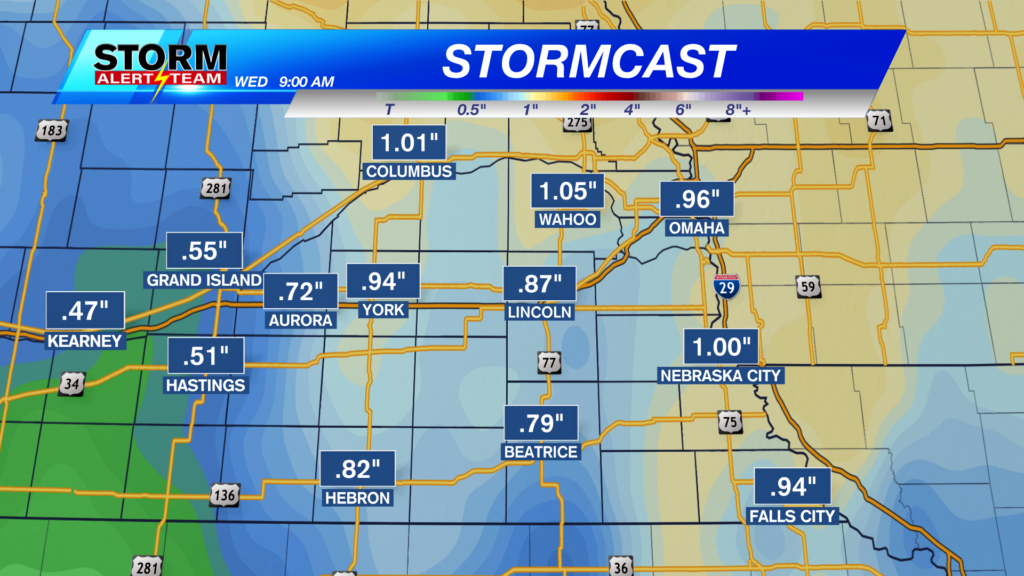 Warmer temperatures are not in the near future either looking ahead toward next weekend. High temperatures will be dropping off into the 30s and eventually 20s by the end of the week.