KPD: Man wanted in connection to fatal shooting in Kearney

A Hastings man is facing charges for the Kearney shooting.

KEARNEY, Neb. (KLKN) — An Omaha man with ties to Hastings is wanted in connection to a fatal shooting in Kearney that occurred in January. 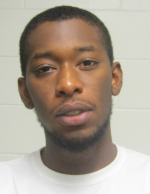 Kearney Police stated in a news release that Chambers is from Omaha but has a Hastings’ address.

A warrant was issued for Chambers’ arrest on Friday. As of Tuesday afternoon, he is not listed as an inmate in the Buffalo County Jail.

An arrest affidavit has been sealed, but a complaint says the murder charge is in connection to the shooting death of Jared Shinpaugh, 31, of Lexington on Jan. 16.

Shinpaugh was shot and killed at 823 W. 23rd Street, according to Kearney Police (KPD). Joseph Garcia, 29, of Lexington was released from CHI Health-Good Samaritan after treating his gunshot wound.

The complaint says Joshua Morris, 18, of Kearney, was also assaulted during the incident, led to the second-degree assault charge. KPD says Morris’ injury was the result of an attempted robbery of both Morris and Garcia.

“Violent crime is not acceptable in this community, I’m proud of the effort by all involved in this case leading to multiple felony arrests,” said KPD police chief Bryan Waugh. “Members of KPD and our allied law enforcement partners have worked tirelessly on this case, leading to the issuance of an arrest warrant for Chambers. The information shared from our community, leads cultivated throughout this investigation, the use of technology, and quite frankly, good old fashion police work led to this felony arrest warrant.”

Morris and Mariah Chamberlin, 19 of Kearney, are facing charges of possession of a defaced firearm, possession of or receiving a stolen firearm, distribution of an exceptionally hazardous drug, possession of more than a pound of marijuana in connection to the incident on Jan. 16.

Garcia and Chenoa Lemburg, 22, are also being charged in connection to the shooting.

Nebraska Tourism receives second national award for 'not for everyone' campaign