The weather is looking very active over the next week. It all begins with a snow chance on Monday. This will be followed by a better-looking snow chance by mid-week along with dangerously cold conditions.

Clouds will return for most of eastern Nebraska on Monday. As early as Monday morning, snow has overspread the southeast corner of the state, including Lincoln. At times, temperatures may rise a few degrees above the freezing mark which could result in more of a wintry mix.

A Winter Weather Advisory is in effect until Noon Monday for Lincoln, Omaha, and points southeast. Roads and sidewalks may become slick, especially in the shaded counties. 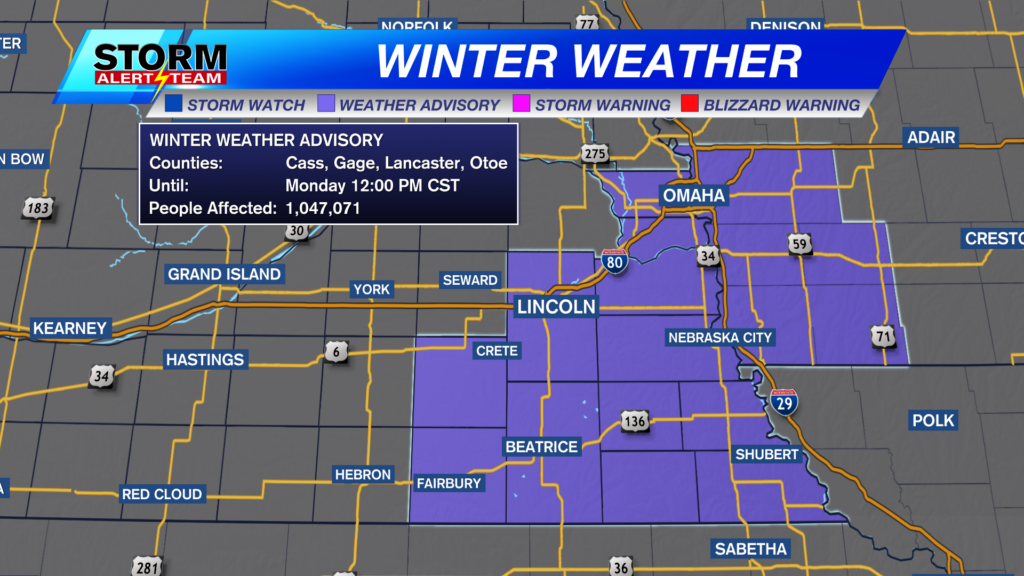 The best precipitation chances will be in the far southeast corner of the state on Monday. The farther north/west you travel, the lower your overall odds of seeing anything fall from the sky. Snow and wintry mix chances will remain through the afternoon, before tapering off in the evening.

Overall snow accumulations are expected to be light on Monday. Up to 1″ is the more likely scenario for most locations. However, there may be some areas that receive up to 2″. With a wintry mix being possible, there’s a good chance that will limit snow totals. 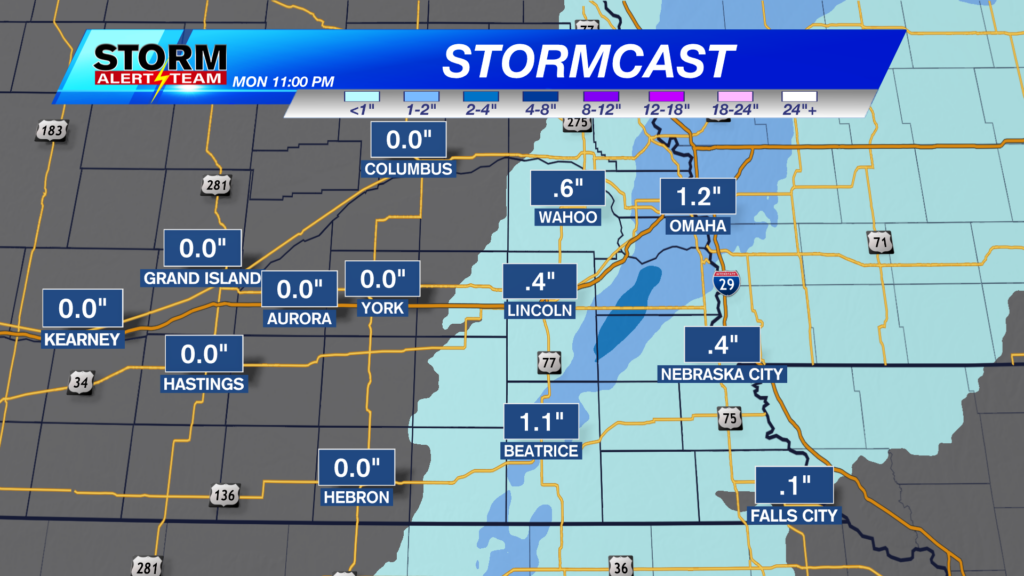 Temperatures during the afternoon may be able to climb into the lower and middle-30s in far southeast Nebraska, which aligns well with areas that could see precipitation. It should be a little cooler for areas north and west. 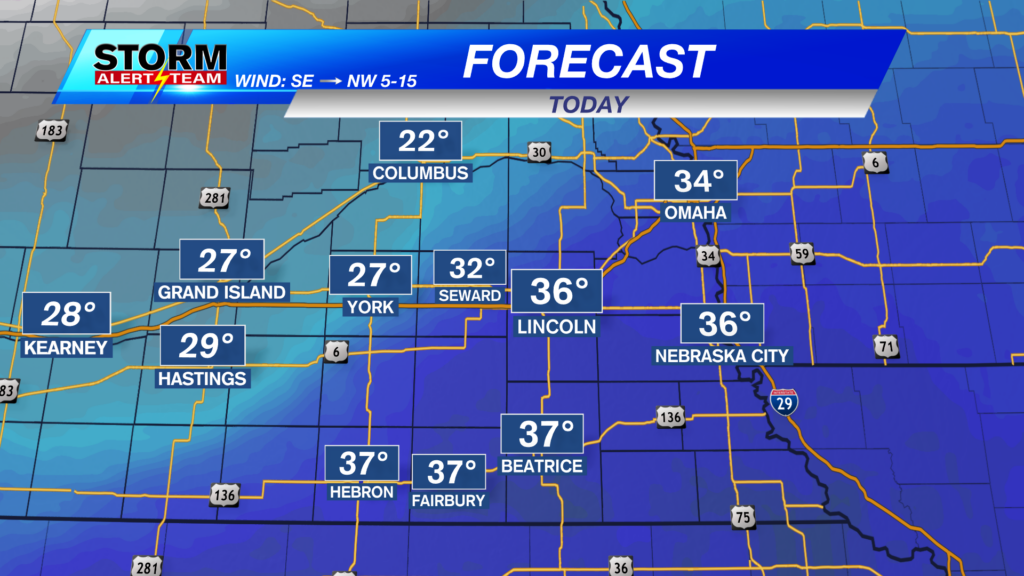 Winter Storm Watches are posted for all of central and eastern Nebraska. Those will go into effect starting Wednesday and Wednesday Night across the state. 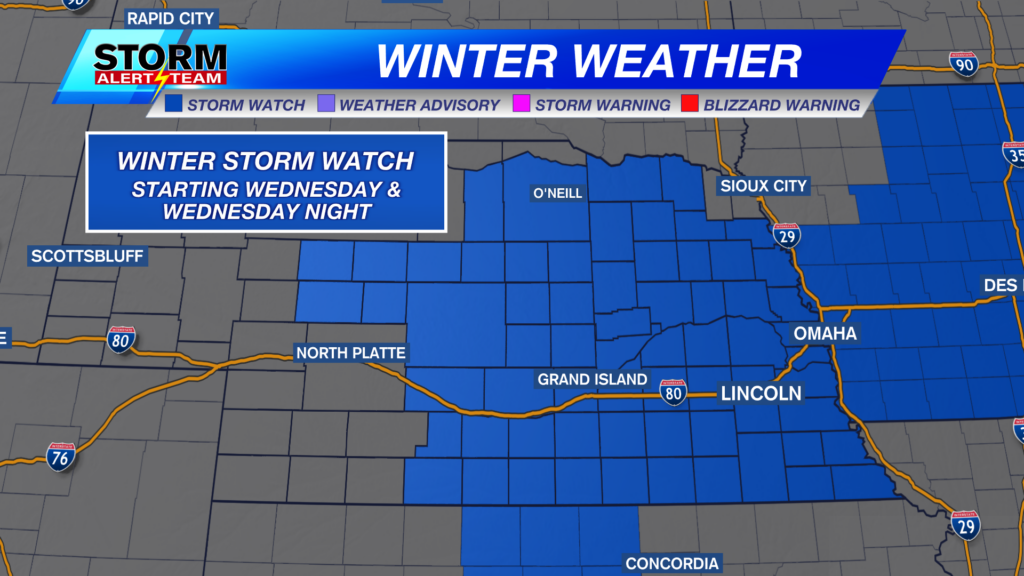 This means that the overall odds are increasing that we may see a significant winter storm later this week. While it is still a little too early to get into the specifics on amounts, know there’s a decent chance to see an impactful snowfall on Wednesday and Thursday.

In addition to the snow, the wind will also be an issue. Wind gusts up to 50 mph will be possible heading into Thursday. Couple that with snow, and we could be talking about blizzard conditions in eastern Nebraska.

Air temperatures will plummet by the middle of the week. With windy conditions also expected, we will be dealing with dangerously cold weather. Actual air temperatures will struggle to get above 0° on Thursday and Friday, with wind chills potentially as low as 45 below zero at some points. 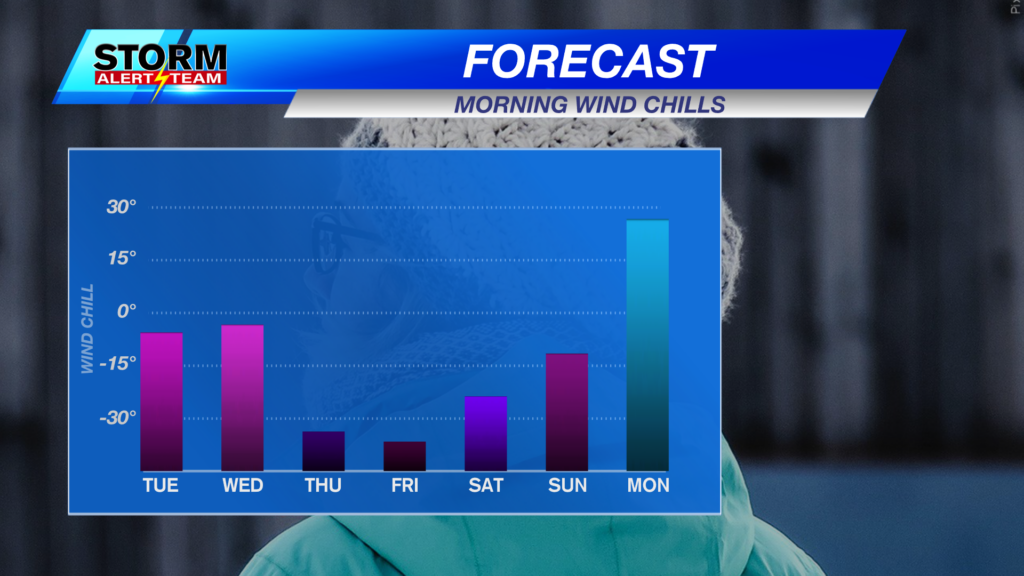