WASHINGTON (AP) — President Donald Trump is threatening to veto a defense policy bill unless it ends protections for internet companies that shield them from being held liable for material posted by their users.

Section 230, which is a liability shielding gift from the U.S. to “Big Tech” (the only companies in America that have it – corporate welfare!), is a serious threat to our National Security & Election Integrity. Our Country can never be safe & secure if we allow it to stand…..

Trump tweeted Tuesday that Section 230 of the 1996 Communications Decency Act is “a serious threat to our National Security & Election Integrity.” He adds that if it “is not completely terminated as part of the National Defense Authorization Act (NDAA), I will be forced to unequivocally VETO the Bill.” Trump has been waging war against social media companies for months, claiming they are biased against conservative voices.

The executive order would reinterpret the 1996 Communications Decency Act (CDA), specifically section 230, which is often referred to ‘the 26 words that created the internet’. 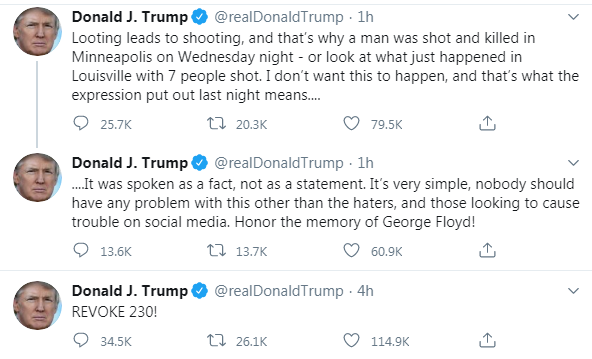 CDA 230 essentially states any who hosts or republishes someone else’s speech, can not be held personally accountable for the originator’s content.

President Trump said this action is partially based off of Twitter’s fact checks, which he claims are “editorial decisions” and should cost social media companies their liability protection.

Posted between Thursday, May 28th and Friday, May 29th.

President Trump claims his order will uphold freedom of speech. While the U.S. Chamber of Commerce objected, “Regardless of the circumstances that led up to this, this is not how public policy is made in the United States.”

We will keep you updated as this story progresses.

Nebraska woman loses $15,000 in romance scheme that stretched on for years